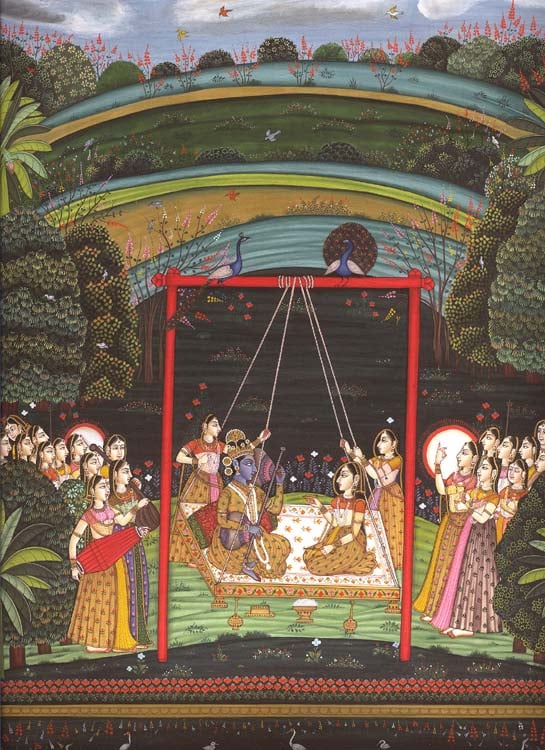 $975.00FREE Delivery
This item can be backordered
Time required to recreate this artwork
10 to 12 weeks
Advance to be paid now
$195.00 (20%)
Balance to be paid once product is ready
$780.00
Notify me when this item is available
"Mounting the rampart, in its course, ascending, descending, coming, and going, the swing captivates the heart of men with its sinkings and risings", writes the tenth century known Sanskrit poet and theorist Rajashekhara, in his dramatic composition Karpuramanjari. King Chandapala, hero of the composition, is hiding up behind a banana grove and sees Karpuramanjari rocking gently on a swing, and with every swing sinks his heart with fear for her whom he did not know. Is it love or Raga Hindola, or two faces of the same experience. It is the same in the Sanskrit poet Kalidasa's Raghuvansha. Maidens, rocking their lovers on swing, experience what they had not experienced ever before. Another Sanskrit verse says : With the tinkling bejewelled anklets, With the sound of lovely jingles, With the show of girdles garrulous, (Pray) whose heart is not bewildered From their ringing, ringing bells, While the moon-faced maiden swings. The swinging one also rocks the hearts of witnessing ones, and hence, scholars have rightly defined Raga Hindola as love's foreplay, howsoever gently this love descends from the swing into the heart of the loving one. Obviously, love is the bhava of Raga Hindola.

As suggests the name Hindola, literally meaning swing, Raga Hindola is visualised as a young nobleman squatting on the swing, alone or with a female companion. While swinging, he might be flirting with his female companion or playing on some musical instrument, mostly vina. Flanking on sides would be female attendants, either only attending on them or accompanying the young man in his music with the instruments that they are carrying. In later cult, swing came to be associated with Krishna, as in him one found the most accomplished model of hero who inspired the kind of love which was the primary spirit of Raga Hindola. Hence, in later innovations, Krishna replaced the nobleman. Sometimes, a nobleman, mostly a state chief, costumed like Krishna, or styled like a cowherd boy, also symbolised Raga Hindola. Treatises recommend that the swing be set in open with green trees and flowering shrubs around and the swing should have gold-like brilliance.

This large size miniature, rendered in the eighteenth century idiom of Jaipur, Rajasthan art, is one of the most accomplished examples of the visual representation of Raga Hindola. The deep magenta-red scaffold, which holds the swing made of golden ropes and the large size seat, is set beside a lake full of lotuses and aquatic birds. Groves of trees comprising multi-coloured foliage, banana plants and flowering shrubs flank on both sides and behind. Behind it lay wide spread multi-hued meadows and stripes of land, and above it is the sky with clouds not allowing the sun to emit hot rays. Krishna, or a nobleman styled as Krishna, is seated against a bolster with a vina in his hands. Most states of Rajasthan not only ruled in the name of Krishna but their chiefs also fashioned themselves like him. Hence, their court artists represented them also as Krishna. Opposite is seated Radha with passion in eyes. Both are clad in rich golden costumes embroidered with elegant butis. Radha has in her right had a small goblet-type object, but a small rod-type object in her right hand suggests it may also be musical disc. Two of the attendants are rocking the swing, while two on the left and three on the right are accompanying him with the musical instruments they are carrying. A few of them appear to be singing. A mass of them on both sides comprises the most glowing aspect of nature and background. A peacock couple, so intimately connected with the iconography of Krishna, is perching upon the scaffold. In them, resonates the mood of the occasion. The male, by its dance, incites passion in the female, as does Krishna by his melody sung on his vina.