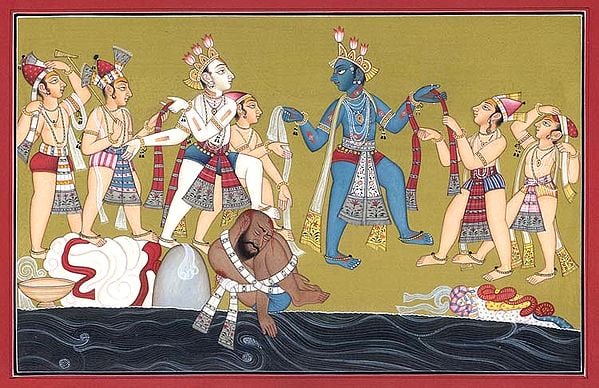 $250.00FREE Delivery
This item can be backordered
Time required to recreate this artwork
8 to 10 weeks
Advance to be paid now
$50.00 (20%)
Balance to be paid once product is ready
$200.00
Notify me when this item is available
This masterpiece revives the great art tradition of medieval India when the art of painting was led to its all time heights representing on tiny pieces of canvas her timeless myths and legends and annals and experiences of ages. This glorious tradition of rendering a great theme on a mini canvas prevailed across centuries, initially illustrating the Buddhist and Jain texts, then at Rajput and Mughal courts and later in Himalayan hills, plains of Punjab and Mughal subas. Though contemporary art forms have largely grabbed India's art scenario but this art form scarcely defines India, nor one is able to discover her in these contemporary renderings. This tradition of the past has, hence, yet the same relevance, as it had two hundred years ago, at least in discovering India, her myths and legends and her great heritage. Now the colours are different, the canvas is different, times and surroundings are different, but India's glorious past and everything related to it is yet the same, and the hands that strive to represent it in its own colours and fragrance may still reproduce it, as has done the artist of this marvelous piece of canvas. It revives the Pahari art tradition as it prevailed around the 1700 A.D. at art centres like Mankot and Basohli. It represents an episode from the Bhagawat-Purana as exactly as did the Mankot artist in 1700 A.D. In medieval India Mankot was a Basohli sub-centre of Pahari art, but in its elegance and finish it often excelled its main seat. In its execution, composition, details, overall finish, treatment of background, river, costume and features of various figures this art-piece is as excellent as the 1700 A.D. rendition of the Mankot artist.

This folio, based on an episode of Bhagawat-Purana, depicts Krishna and his elder brother Balarama chastising Mathura's Rajakabadha, or the royal washer-man. After all his attempts at the life of Krishna had been foiled, Kansa, the demon king of Mathura, conspired to kill him by his mighty wrestlers in the wrestling arena. In consultation with his courtiers, Kansa planned to organise a fourteen-day programme of archery. It included amongst other things wrestling competition. A special invitation was sent to Nanda to send his sons Krishna and Balarama to participate in it. Akrura, a common relative, was sent to Vrandavana for delivering the invitation and to bring Krishna and Balarama with him. Nanda always doubted Kansa's intentions and was reluctant to send his sons but could not disobey the royal command. Krishna and Balarama accompanied Akrura on his chariot. Many of their playmates also headed towards Mathura separately on foot. By the time they reached Mathura's outskirts, the sun set and the darkness enshrouded the earth. They decided to camp outside the city and Akrura alone went to inform Kansa of their arrival.

In the morning, with their poorly clad playmates Krishna and Balarama entered the town. Krishna was looking for some respectable costume for his friends. Near river Yamuna he saw a man walking towards the river with a bundle of clothes. Cloth-ends suspending from the bundle revealed that they were royal garments and the person carrying them was Rajakabadha, the washerman of Kansa. Krishna asked him to spare some garments for his friends but the arrogant Rajakabadha only insulted him by his harsh words. Krishna caught his hold and thrashed him on the ground and taking a sash from his own lot tied him with it. He then distributed all the garments, which he was carrying, amongst his friends and passersby. The painting depicts various stages of the episodes, though it has been neither serialised nor compartmentalised. The washerman lay tied with a sash near his washing slab. There lie around it his washing tub and unwashed clothes. Krishna and Balarama are distributing amongst their friends various garments, which some of them are in the process of receiving and others are putting them on.

The painting is superb in its treatment of river, gold-hued yellow-green background and the total impact. The artist has shown great skills in rendering costumes, the transparent white as well as coloured ones embroidered with gold and silver threads in excellent floral designs. Each figure has been cast in absolute proportions and with a sense of distinction wherever required. The body colours of washerman, Krishna, Balarama and their playmates are in perfect adherence to the iconographic convention and to their respective classes. Costumes depict a similar distinction. The washerman is bareheaded, Gopas wear conical caps and Krishna and Balarama are in crowns. Krishna and Balarama have Vaishnava marks on their persons, which denote their Vaishnava links. As compared to others, Krishna is more lavishly bejeweled.