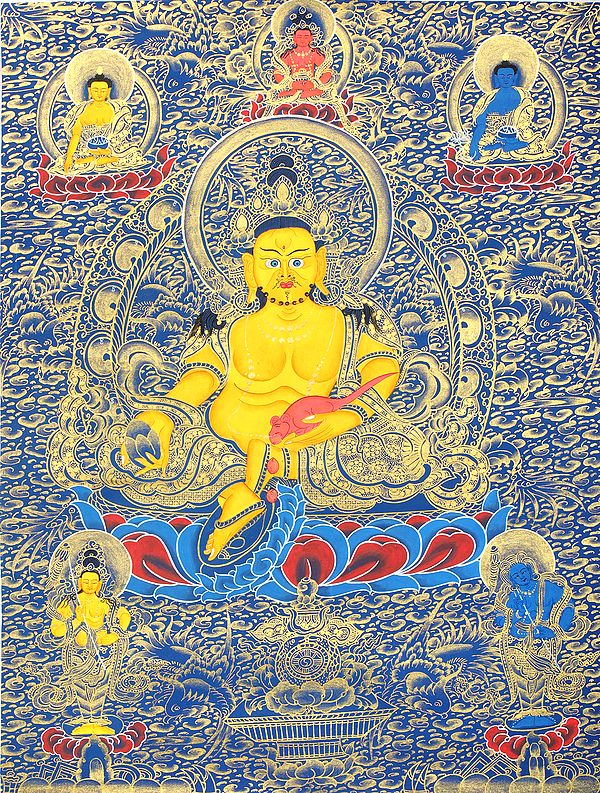 Kubera -The Tibetan Buddhist God of Wealth (Thangka Without Brocade)

FREE Delivery
Only 1 available
$157.50
$210
(25% off)
Kubera, the God of wealth according to Buddhism is also known as Vaishravana. He is considered as a guardian king of the north direction and of the Mount Sumeru that is believed to be the centre of the universe.

In this thangka Lord Kubera, the God of wealth is seated in a royal posture. He has a golden yellow complexion and plump torso decked with gold ornaments. He wears a five-pronged crown that symbolizes five transcendental Buddhas. His huge set of eyes, upturned lips and peculiar mustache with beard are the remarkable characteristics of the deity. The long and flowing scarf is wrapped around his body and below the waist, his body is covered with superfine garments. He tends to hold different attributes in his right hands such as sword, banner, lemon or flat vessel, etc but most famous insignia for which he is generally recognized is Mongoose (Nakula) which he holds in his left hand. Mongoose represents blessings from the lord of wealth as it keeps spitting jewels from his mouth. Lord Kubera sits in the lalitasana pose wherein his leg is drawn up and the other is relaxing on the pistil of the lotus. He is seated on the lotus throne. The offerings placed before him are precious jewels.

His thangka is placed on the outer walls of temples or monasteries as it tends to negate the harmful influences which can violate the sanctity of sanctorium.