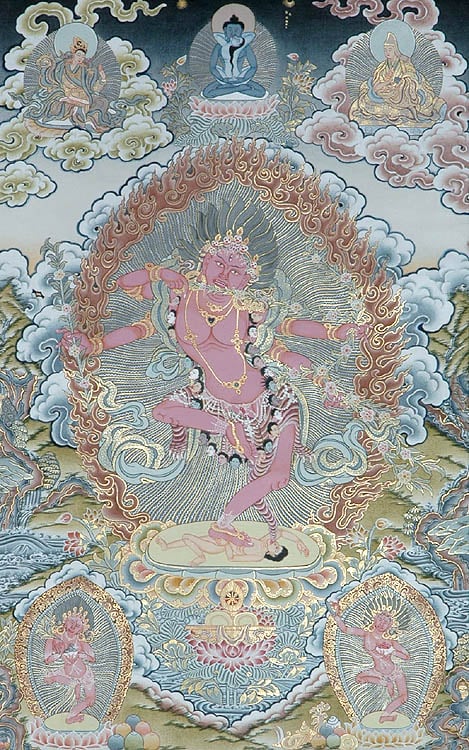 $255.00
Notify me when this item is available
Save to Wishlist Send as E-card Share by Email
This thangka portrays goddess Kurukulla on a lovely Tibetan mountainous landscape. The goddess is called the heart of Tara. She is worshipped by unhappy lovers. Kurukulla confers success in the Tantric rites of vasikarana or enchanting men, women, ministers, and even kings. It is said that she is generally invoked when no women is near. If she is invoked with the mantra Om Kurukulla Hum Hrih Svaha, preferably before her image ten thousand times, she touches the heart of the beloved who is surely won over.

Kurukulla is considered as the Buddhist counterpart of Kamuela, the god of love and his consort Ratio. But unlike Kamuela she does not enslave beings to lust; rather by energizing their liberating insight into the nature reality, she captivates their passions and turns them toward the realization of the Dharma.

The iconographical texts mention different forms of Kurukulla both in peaceful and wrathful appearance. Here the goddess is dancing in ardhaparyankasana on a corpse. She has one head, three eyes and a ferocious expression. Her hair is erect in loose. Kurukulla has four hands, on the right she holds a flowery arrow and the second right hand clasps and pull the bow-string (not clearly visible) and flowery arrow; at the left a hand holds the flower bow and the other a flowery stick with stems.

She wears a crown of five skulls with gemstones. Her body is decked with ornaments which are made of gold with precious gemstones and bone. Moreover she wears a long flowing silk scarf, a long garland of severed human heads, and tiger-skin skirt. There is an arch-shaped aureole with wisdom fire border, behind her body.

On the top Adi-Buddha Samantabhadra is seated on a lotus throne, while in the upper left corner a Tibetan king is seated with a scripture on a lotus throne in clouds and in the right corner perhaps a Nyingma lama who is holding a Vajra and bell, is seated on cushion throne in clouds. An angry Dakini, holding scull cup and a stem of leaves, is shown at the bottom left corner, while Vajrayogini, depicted at the bottom right corner, is holding a Vajra-tipped chopper and a skull cup. The drawing and color-combination of the painting is brilliant. The thangka is very much suitable for sadhana and practices of Kurukulla. 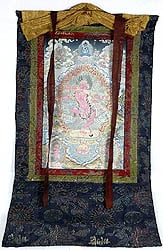