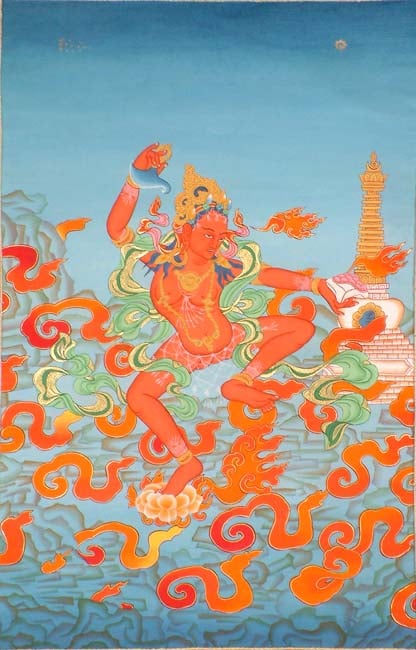 $225.00
Quantity
Notify me when this item is available
Post a Query
The word "siddha" denotes a practitioner of Tantra who has been successful in achieving the goal of all tantric meditation which is "siddhi." The prefix "maha" means "great" or "magnificent." Thus the Mahasiddhas are the greatest and most accomplished travellers on the Tantric Path. Contrary to popular opinion, Buddhism female adepts were not lacking in successful Tantric practice.

There is a well-known group of eighty-four Mahasiddhas, who flourished in India from the eighth to twelfth centuries. Basically, the lives of these eighty-four Indian men and women abound in episodes that demonstrate their conviction to perform any act contrary to convention.

The life story of Mahasiddha Laksminkara describes the kind of journey that is often required of those who seek ultimate truths.She was born into a royal family and had been delicately brought up in luxurious surroundings. She showed a grasp and understanding of tantric concepts even at an early age. All in all it was an idyllic life until she was betrothed to the king of Lanka (Ceylon) as part of a deeper political alliance.

She travelled to Ceylon with a large dowry. Due to a delayed departure, the wedding party arrived only some days after it was expected. The court astrologers present at the city gate informed them that it was an inauspicious day and that the bride and her retinue must wait until the following day before entering the city.

Already apprehensive, Laksminkara felt into a depression. Suddenly, she observed in the distance a great clamour, and presently a hunting came into view. At the head rode a stern faced man in royal clothes soiled by a bloody carcass, the trophy of the game, which he had carelessly tossed across his shoulders. He was her future husband.

The princess despaired when she witnessed this inhuman treatment of animals. Being a thoughtful Buddhist she reached a new resolve at that very moment. She had all the chests and trunks carrying her dowry opened on the spot and began to distribute it amongst the crowd which had gathered there. Everything was given away. Even the jewelry was bestowed on her attendants before they were sent back.

The next day, when she was finally invited into the palace, she locked herself into a chamber and refused to see anyone, discouraging visitors by throwing things at them. The princess then proceeded to unbound her hair, tore off her clothes and rubbed ashes on her body. She talked incoherently in a prattle, and to all appearances, she was hopelessly insane. Her erratic behaviour led to the wedding being cancelled, which was exactly she what she had hoped would happen.

One night, she crept out of the palace and fled to a cremation ground, renouncing the world to become a yogini, living by scavenging the food thrown out for dogs. She lived so for seven years until she attained siddhi. A sweeper of the royal latrines served her faithfully during this period. When she gained her realization, he was the first person to be initiated.

Laksminkara's story dramatizes the lengths to which a mystic must sometimes go in order to severe the attachments that prevent full immersion into the Highest, egoless state. When she came out of seclusion she attracted a large circle of disciples some of whom subsequently became quite famous. Her former fiancé too converted to Buddhism and asked her to be his guru, but she assigned him to the low-caste sweeper who had been her first disciple.

The artwork very aptly brings alive in her vigorous and contorted movement her feigned madness. Balancing her right leg on a blooming lotus, she lifts the left up high. The upraised right arm brandishes a chopper while the lowered left holds up a skull-cup. Unstitched silk scarves flair around her, but do not conceal any of her feminine charms from the viewers' gaze. A skirt made of human bones, fashioned like a spider's web, emphasizes that she is sky-clad rather than grant her modesty. Heavy chokers and necklaces made of gold clamber down her globular breasts, one of them ending just below the jewel of her ample waist, the navel. The energetic dance takes place in air, emphasizing that the action takes place on the cosmic rather than the mundane plane.