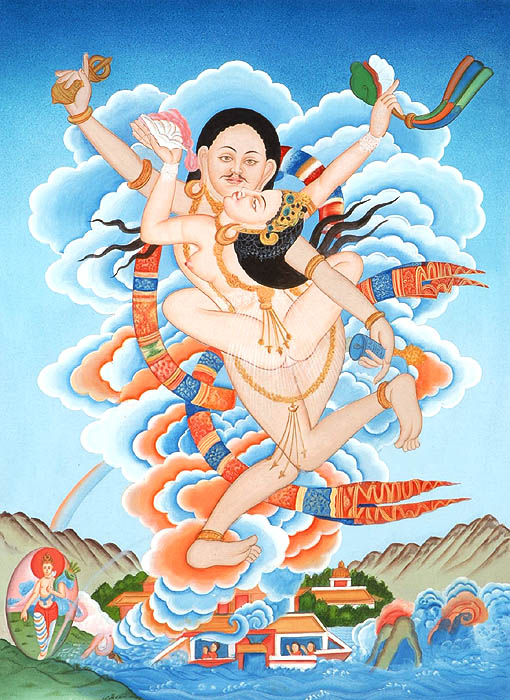 $145.00
Notify me when this item is available
Save to Wishlist Send as E-card Share by Email
Ghantapa was the son of the king of Nalanda, the city which housed the famous ancient monastic university. He renounced the throne however, and became a learned, celibate monk, taking up residence near Pataliputra, where ruled the king Devapala (r.ca. 809-849).

King Devapala was himself a pious and devout person. On hearing of the noted sage's arrival at the edges of his city, he asked the holy man to take up residence in his own royal palace, Ghantapa refused the king's request, proclaiming the latter to be a sinner. The king's repeated requests were of no avail, and this greatly incensed his royal highness. Feeling slighted, Devapala took upon himself to avenge his humiliation.

Accordingly, the king offered to give half his kingdom to anyone who could violate the sage's celibate status. A voluptuous courtesan named Darima took upon herself to accomplish this task. For this purpose, she enlisted the support of her twelve-year old virgin daughter, whose charming face, seductive gait, well-developed hips and nubile breasts caused even the sun to halt in its tracks whenever it lay its eyes upon her. Darima felt that her daughter's pronounced sensuality combined with her pristine purity would definitely help her achieve her goal.

The young girl, playing upon the monk's compassion, managed to snuggle inside his diminutive hut on the pretext of taking shelter in a stormy night. Inevitably, during the course of the night, their bodies touched and one thing led to another and they ultimately became lovers. The next morning Ghantapa asked her to remain with him as his consort. The girl agreed. As time progressed, the venerable one's own inherent purity cured the young lady's mind too of its defilements. And an year later a child was born to them.

King Devapala, meanwhile, had come to know of what had transpired between the two. With a large retinue, he confronted the sage, accusing him of a gross loss of conduct. The huge crowd supported the king with loud abuses hurled against Ghantapa. Finally, Ghantapa hurled both his son and the gourd of wine he was carrying on the ground. The earth trembled and split wide open, and a flood of water gushed forth.

Ghantapa's child was transformed into a thunderbolt and the jug of wine into a bell. Taking hold of one in each hand, Ghantapa along with his consort, rose into the air and there they were transformed into the deities Samvara and Vajravarahi, conjoined in the father-mother union. They hovered over the heads of the king and his supporters.

The waters rose higher and higher, threatening to consume both the king and his followers. As death seemed imminent, and all were on the point of drowning, the people prayed to Ghantapa for forgiveness. Their cries however were to no avail. Suddenly there appeared Avalokiteshvara, the bodhisattva of compassion. He placed his sacred foot over the crevice from where the flood was issuing and the waters immediately entered back into the earth.

Everyone was relieved. Prostrating themselves on the ground, they all asked for Ghantapa's forgiveness. In his message of forgiveness, Ghantapa gave the following profound message: ""Do not cultivate virtue and renounce vice. Rather, learn to accept all things as they arise. Penetrate the essence of each experience until you have achieved the one taste.""

Then he recited the following verse:

Here, Ghantapa is shown rising into the air, in intimate union with his consort. While his skin is of a slightly brown-hued texture, hers is a sensuous pink. The flooding waters dominate the lower panel of the painting. People with folded hands can be seen praying to Ghantapa for mercy. The benevolent Avalokiteshvara, at the lower left corner, has his foot planted over the crevice from which issues the flood.