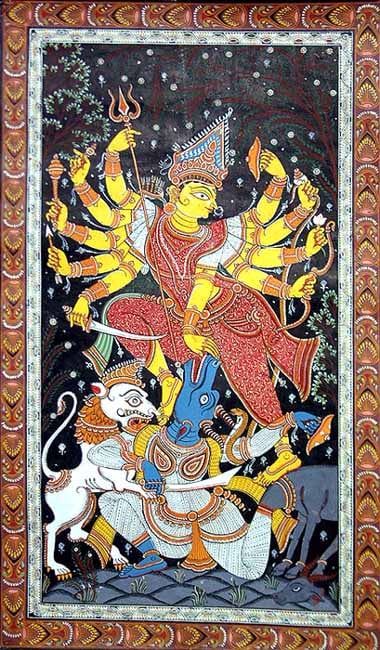 $125.00FREE Delivery
This item can be backordered
Time required to recreate this artwork
6 to 8 weeks
Advance to be paid now
$25.00 (20%)
Balance to be paid once product is ready
$100.00
Notify me when this item is available
This typical Orissa image of Goddess Durga killing the buffalo-demon Mahisha is superb in the depiction of motion contained in the body of the Goddess. Figure's anatomy has been wondrously accorded to the theme of the painting, a 'pata' in characteristic Orissa style. Figure's every member, each muscle and demeanour, depicts the force required while killing the mightiest demon whose terror had once horrified the worlds of men and gods alike. The lion ridden Devi by the force of her offensive has shot into air like a missile leaving below her ride, the lion, free to join into her action against Mahishasura.

Goddess Durga's Mahishasura-Mardini form prevails over her all other forms. In votive art she is more than often represented as Mahishasura-Mardini. Incidentally it is in this form of hers that her aesthetic beauty, too, is most perceived for it combines in it the sublimity of aesthetic beauty with sublime force. This form of Durga is, hence, as much the theme of aesthetic art. In this 'pata' the Orissa artist has packed the character and colours of his own land as well as the textual tradition of Devi rituals. In adherence to ritual tradition the artist has armed her with various weapons prescribed in texts - spear, wheel, mace, arrow and sword on her right and shield, serpent, conch, lotus and bow on her left. The features of her face - a parrot-beak like pointed nose, large fish like eyes, well defined round chin and coiled neck, massive anatomy and large angular crown have reflection of 10th-11th century Orissa sculptures and 13th-14th century Orissa palm leaf drawings and paintings. She has been clad and adorned in typical Orissa costume and ornaments.

There prevail two traditions as regards the origin of Devi. According to one she has always existed. When in great deluge all had perished and Vishnu, floating on a fig leaf as a child after the deluge, was in bewilderment not knowing what he had to do, it was Devi who appeared before him and helped Creation. The other tradition, and more akin to public mind, relates to her killing Mahishasura. As the texts have it, a demon by the name of Mahisha, meaning buffalo, once ruled the earth. By his great penance he had won from Brahma the boon of invincibility against all male. This turned him into a highly ambitious and arrogant ruler. After grabbing the entire earth he decided to invade Indra's heaven. In the war that ensued Indra and all gods were defeated and had to flee from heavens.

Gods later learnt from Brahma of Mahishasura's boon and that he could be killed, if at all, only by a female. After due deliberations gods decided to create a female power out of their own attributes as also bestowing on her the absolute divine beauty and female graces, such as made her represent also the absolute womanhood on earth. Her head was formed by the powers of Shiva, hair by that of Yama, arms, breasts, feet, toe-nails, fingernails, nose, teeth, eyes, brows and ear respectively by the powers of Vishnu, Moon, Indra, Brahma, Sun, Vasu, Kuber, Prajapati, Agni, Twilight and Vayu. Ocean offered her its glittering jewels and Shesha a necklace inlaid with celestial gems. Alike they all gave to her their respective weapons. Finally, Mahamuni Narada disclosed to the newly created Goddess the sad plight of the gods and the errand for which she had been created. The Goddess delightfully accepted the prayer of gods and later in a fierce war killed the buffalo demon Mahisha.