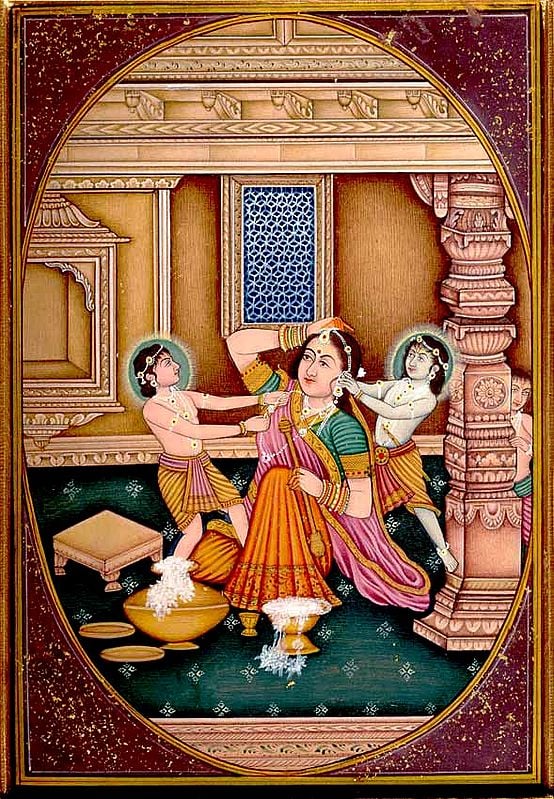 $95
Quantity
Notify me when this item is available

Fair trade
Popular are various lores of Krishna and Balrama's irrepressible and buoyant childhood, their boundless energy and spontaneity. This painting is not only deification of childhood, but also glorification of motherhood. The two are encapsulated in a world of boundless love and joy. The intensity of their relationship is brought to the fore in many paintings and poems.

Krishna, more than Balarama is exuberant in his pranks, mischievous, incorrigibly naughty and almost uncontrollable in the pursuit of his whims. He is distinguished by his blue body. The nimbus around the heads of both the children give the mischievous duo a kind of serenity. A child behind the pillar is a witness to the pranks played by the two, who are uninhibited, willfully perusing their aims, oblivious to rights and wrongs, asking what they want and throwing a tantrum if denied.

They are intentionally troubling Yashoda while she's churning butter for them. Balarama tugs at her neck strings, while Krishna displaces the palla off his mother's head. She tries to put it back in place with one hand while with the other she holds the stick used for churning butter. She is wearing colorful clothes. Her ghagra falls in graceful folds over her knee. Despite their pranks, she does not display annoyance. She does show mock indignation but cannot sustain it for long and her stern visage breaks down under an upsurge of maternal affection.

Jewelry adorns the head, neck, arms and ankles of the two children, adored by the whole of Vrindavan.

Architecture is as predominant as the thematic characters. The pillars, the pierced marble screen window, the niche created in the wall and the various stratums of the wall not only speak highly of the architectural style of the times but also of opulence and authority.