The Mysterious Interplay of Life and Death 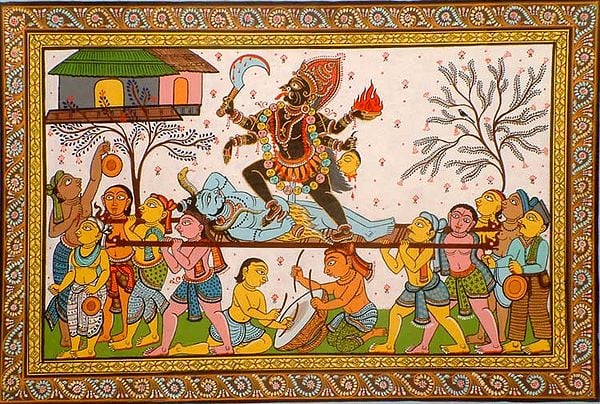 $105.00FREE Delivery
This item can be backordered
Time required to recreate this artwork
6 to 8 weeks
Advance to be paid now
$21.00 (20%)
Balance to be paid once product is ready
$84.00
Notify me when this item is available
Paradoxical and gruesome, Kali is the most cherished and widespread of the personalization of the cult of Tantra. Image of the goddess as destroyer is quite graphic - necklace of human heads, skull in hand and a girdle of human arms. The dead body that she rests so nonchalantly on in this painting is the 'shava' or literally corpse which signifies many things  her triumph in general, the limits of time and in some cases even Shiva bereft of his power.

In this painting, Shiva is being carried in a traditional manner on a makeshift wooden plank on long poles. As the death procession follows, it is lead by a couple who beats upon a copper plate as if to announce the arrival of the dead body. Two bearers ahead and two behind carry Shiva's lifeless body to the beat of drums. Atop Shiva's corpse stands the gruesome looking goddess. What we witness is that mysterious interplay of life and death, of creative animation and destruction.

The carrier of the dead body, in a way, divides the painting horizontally. Below it are the humans and above is Shiva and his consort. Another compositional element is Shiva's horizontal position and Kali standing vertically on top of him. Most colors of the palette are used in the lower half. The background is white with Kali's dark figure standing out.