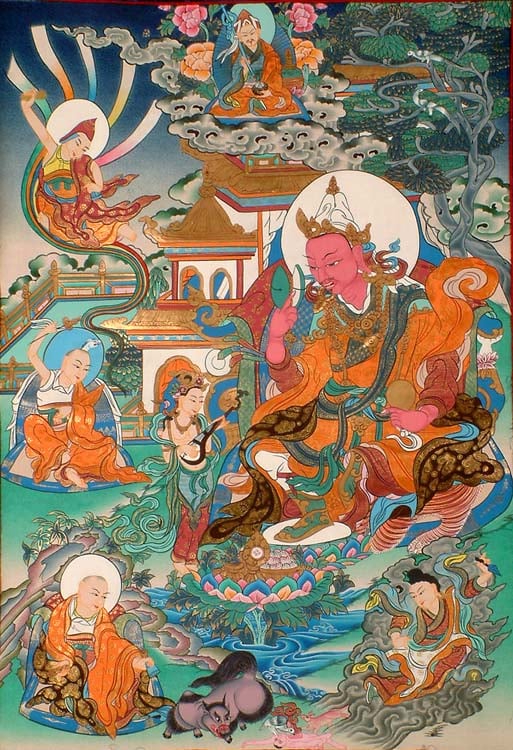 $285.00
Notify me when this item is available
Save to Wishlist Send as E-card Share by Email
The lotus born Padmasambhava of Oddiyana (Swat) was a great legendary Adept, he was renowned for his knowledge of Buddhist tantric dharani (mystical sentences) and of their efficacious application. He was invited in the late 8th century A.D. to Tibet to help convert the Tibetans to Buddhism. He is considered as a major culture hero of all Tibetans. Though all Buddhist sects revere him, but his teachings are central in the practice of the Nyingmapas. Tibetans usually call him Guru Rinpoche, Precious Teacher, and consider him as a second Buddha.

Padmasambhava has been depicted in arts in many ways, among them one is of his eight manifestations. His each for or manifestation is based on his actions he performed during his lifetime. Among them one is king Padmaraja. Guru Rinpoche Manifests here as the royal king Padmaraja, the royal persona he adopted when living in his original homeland Oddiyana. He is seated slightly turned on a throne before his palace and enjoying his majestic ease. The complexion of his body is red. He holds a drum in his right hand and mirror in the left hand. A drum (damarau) generally symbolizes impermanence and it is the symbol of celebration of the mystic teachings of the tantra. A mirror generally represents sight. Padmaraja wears jewel crown and ornaments that are painted with gold and an ornately decorated brown robe with an orange outer cloak and green scarves. A royal lady with lute is standing before him, may be to entertain the king. On the top center there is a figure of a lama, either he is Guru Rinpoche in his usual form or a Nyingma lama, who is holding a khatvanga and a bowl. In Chinese style, a flying lama, holding vajra and ghanta is shown on upper left corner in rainbow light. There are two beautiful trees on the upper right corner. A siddha, brandishing a khatvanga, is seated on the left of middle ground. There is a head of a horse on the top of his head. The auspicious offerings are shown on a lotus flower, emerged from a lake before the throne of king Padmaraja. The bottom corners are filled with the figures of siddhas, who are actually the disciples of Padmasambhava. The bottom center is filled with charnel ground, which is represented by dismembered corpse being devoured by wild creatures. There is slight a big wild animal in the ground.

The composition and color-combination of the painting is excellent.

This description by Dr. Shailendra Kumar Verma, Ph.D. His doctorate thesis being on the "Emergence and Evolution of the Buddha Image (From its inception to 8th century A.D)." 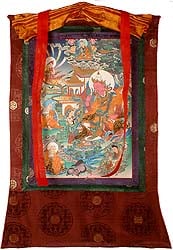