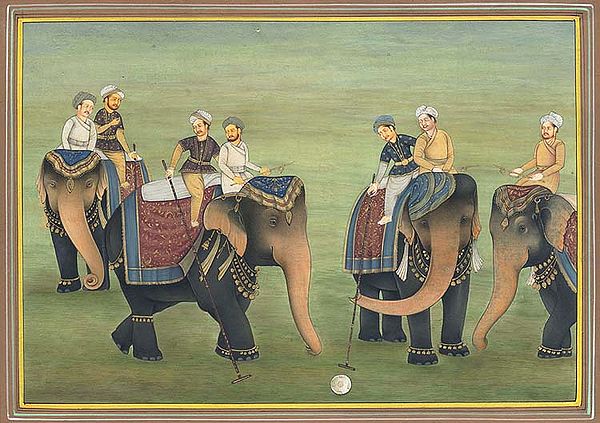 $305.00
This item can be backordered
Time required to recreate this artwork
6 to 8 weeks
Advance to be paid now
$61.00 (20%)
Balance to be paid once product is ready
$244.00
Notify me when this item is available
Save to Wishlist Send as E-card Share by Email
There are numerous references to elephants in the Akbarnama & Tuzuk-i-Jahangiri. It indicates the fascination of the Mughal emperors for this huge animal. They were impressed with its sharp intelligence, faithful nature & indispensability in the battlefield. It was also the preferred animal for hunting & other sports.

Elephant fights were not the only sport associated with them. In this painting, we see polo being played on elephant backs. The pachyderms are bedecked especially for the occasion; silk overcloth, ornamentation of its neck and feet form the decoration. A couple of elephants can be seen frontally. They have two persons each on their backs, one being the 'mahout' or the trainer & the other being the player. Both are seated in different positions, the players with one leg on either side, in order to maintain balance required to maneuver the ball with the long sticks. The sport was no different from that played on horsebacks, but definitely slower. If the players ore displaying their competence with the hockey sticks, the mahouts prod the elephants with the gold goads held in their hands.

The background and the foreground are treated in an identical manner; not much distinguishes one from the other. The sky and the ground appear in same colour tones and similar brush strokes.