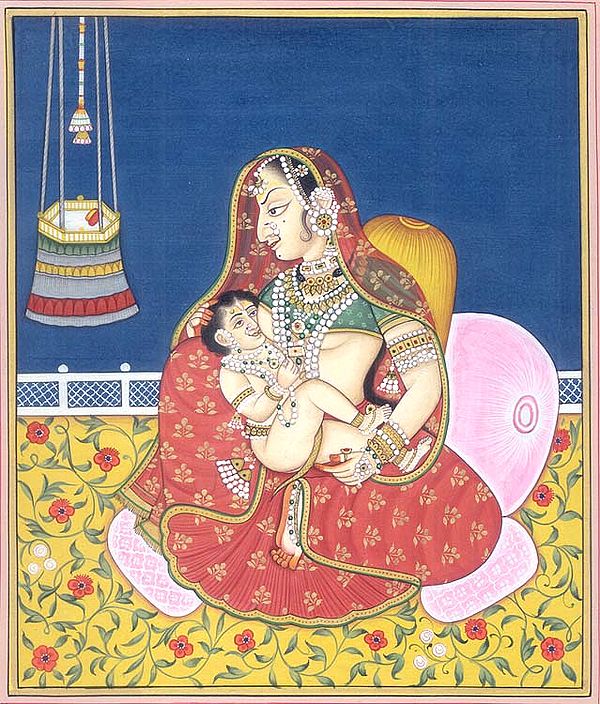 $160.00FREE Delivery
This item can be backordered
Time required to recreate this artwork
6 to 8 weeks
Advance to be paid now
$32.00 (20%)
Balance to be paid once product is ready
$128.00
Notify me when this item is available
A beautiful young woman, in the full bloom of her femininity, once entered the residential premises of a provincial chief of cowherds. Dressed attractively, she appeared very comely, what with her raised hips, nicely swollen breasts, earrings, and the heavily scented flowers in her hair. The thin waist added in no small measure to her allure. Her smiling face captivated the hearts of everyone present and she found it easy to glide in to the innermost chambers where the chief's wife was resting along with her newborn infant son. Approaching the adoring mother, she offered to suckle the young one from her own breasts. There was no question of refusing the request. The lady accepted the child into her open arms and held him to her bosom. The baby took one breast in his little hands and started sucking. Then a strange thing happened. From the look of a strange triumph, the woman's expression first transformed into one of surprise and shock and then into agony, and finally her features contorted into a mask of anguish and shrieks of pain escaped her lips. Her efforts to take away the breast from his soft grip were futile. Her cry was so intense that both sky and the earth reverberated with its echo. As the child pressed her breast extremely hard and sucked out her very life, she fell to the ground. With her arms and legs spread, she began to cry, "Oh, child, leave me, leave me!" Suddenly, as she entered the spasms of death, her beautiful appearance disappeared, revealing a monstrous personality beneath.

The above narrative describes a famous episode from the annals of Indian mythology. The little one is of course the beloved god Krishna, most popularly celebrated as a child deity. The lady in question is Putana, an ogress who had been assigned the job of killing him.

Over a decorated carpet can be seen the two figures, the baby joyously suckling away at the demoness' breast, while she looks on smugly. Though Putana is represented as a beautiful woman, nonetheless her villainous character is evident in the sharp fangs visible through her semi-open lips and the hawk-like aquiline nose dominating the face. Other than that she could be mistaken for any 'ordinary,' beautiful woman, what with her buxom form, inhabited by luscious curves just at the right places. The numerous jewels ornamenting her body could further mislead anyone into believing her to be a lady of a noble and royal lineage.

The Book Of Demons (Including A Dictionary of Demons in Sanskrit Literature)
By Nanditha Krishna
$28.50
FREE Delivery