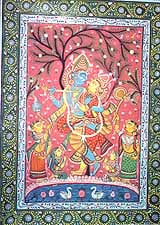 $65.00FREE Delivery
This item can be backordered
Time required to recreate this artwork
6 to 8 weeks
Advance to be paid now
$13.00 (20%)
Balance to be paid once product is ready
$52.00
Notify me when this item is available
Krishna was physically irresistibly appealing. Ancient texts dwell at length on his exceptionally alluring countenance: a blue complexion soft like the monsoon cloud, shining locks of black hair framing a beautifully chiselled face, large lotus like eyes, wild -flower garlands around his neck, a yellow garment (pitambara) draped around his body, a crown of peacock feathers on his head, and a smile playing on his lips, it is in this manner that he is faithfully represented since the ancient times to the modern.

In this beautiful pata painting he is shown embracing Radha with his left hand, and nearly cupping her left breast. With his right hand he supports his flute. Radha extends her left hand to grab his flute, as if to snatch it from him. Both of their legs are intertwined in a unique erotic-yogic posture.

In the embrace of Krishna, the gopis (including Radha), maddened with desire, found refuge; in their love dalliance with him who was the master in all the sixty-four arts of love, the gopis felt a thrill indescribable; and in making love with him in that climatic moment of release, in that one binding moment, they felt that joy and fulfilment which could not but be an aspect of the divine. Through their experience, thus, the erotic the carnal and the profane became but an aspect of the sublime, the spiritual and the divine. This cumulative myth sustained one basic point: for women, Krishna was a personal god, always accessible and unfailingly responsive. He was a god specially made for women. In the popular psyche, Krishna and Radha became the universal symbol for the lover and the beloved. Krishna was the ideal hero, and Radha the ideal heroine.

This is a pata painting. Pata is a Sanskrit derivation which literally means canvas. The art of Pata Painting (or pata chitra) is practiced by the artists of Orissa, a state on the Eastern Coast of India.