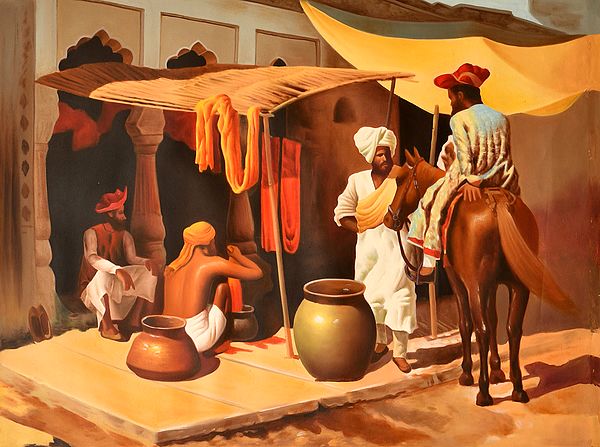 The rangrez is a community of Muslims who used to reside in India during the British Raj. After gaining independence, they settled in Karachi, Sindh. Rangrez is a Persian term that means "one who puts on colour or dyes."  Their original trade was dyeing and printing garments. India during the Mughal period was known all over the world for its domestic labourers and manufacturers, which it exported notably to western Asia and the northeast. These included various kinds of cotton textiles like calico, dyed, printed, and silk fabrics. Noted that the tribe of rangrez we exceedingly numerous in this country during the Mughal sultanate.

Here is a depiction of Anup Gomay in which the king's officials or the merchant is collecting his dyed garment or taxes. In the canvas, one could see the boiling copper cauldron with coloured water. The dyed apricot clothes are hanging on a man-made drying stand. The labourers are busy with their tedious work as their masters discuss the imposed taxes and the upcoming battle between the marwars and the sultanas. The artist has canvassed the pain of the rangrez community who is crushed between the domain of war and free labour.