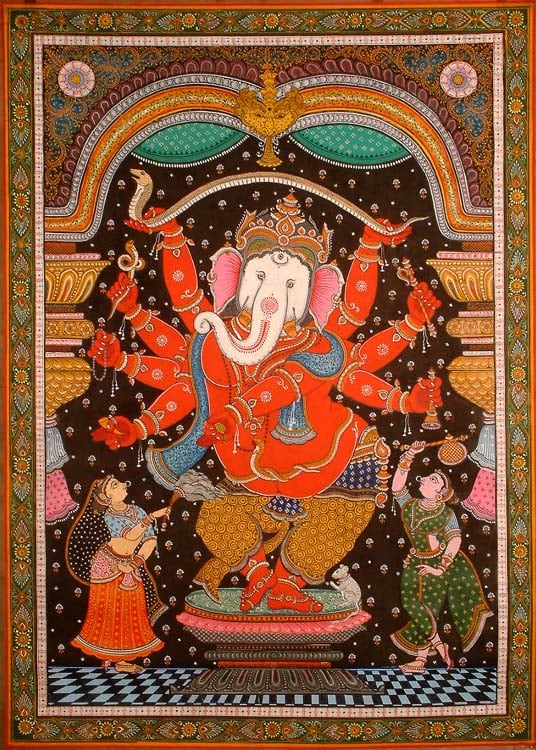 $195.00FREE Delivery
This item can be backordered
Time required to recreate this artwork
6 to 8 weeks
Advance to be paid now
$39.00 (20%)
Balance to be paid once product is ready
$156.00
Notify me when this item is available
Ganesha is the most lovable and accessible of all gods. Stories in various Puranas narrate his sacred history and colourful tales of his escapades. He is the deity who needs to be propitiated before any undertaking.

This eight-armed image of Ganesha depicts him with the body of a human and the head of an elephant. He has a rotund form and is red-hued. His elephant head is a symbol of his immense wisdom. It is painted white here, quite distinct from his red body. Most tales attribute it to the divine white elephant Airavata, whose head was attached to Ganesha's body after his beheading.

In his two topmost hands Ganesha stretches a large serpent; holds it in one other hand as an attribute. Not only this, he ties one snake as a waistband. He stands in a dancing mudra (gesture), with his right foot resting on the toes and the left bearing the weight of his body. The two women on either side of Ganesha could be identified as Siddhi and Riddhi, his shaktis. A small mouse sits at his feet, on the pedestal, with hands folded in veneration.

The artist has liberally used colour and pattern in this pata-chitra. They mix and match at places, at others they clash. Yet, they do not create an unaesthetic effect.

This Description by Renu Rana.