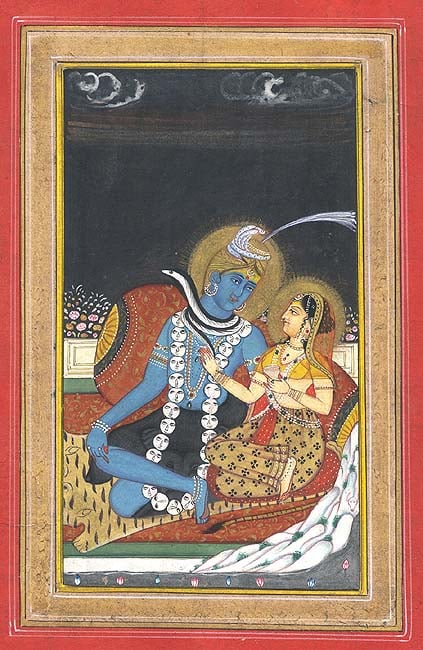 $105.00
Notify me when this item is available
Save to Wishlist Send as E-card Share by Email
Religion and art are undeniably linked. The numerous gods and goddesses of the Hindu pantheon are a source to the artists subject matter. With the wealth of tradition available, the artist reinterpreted the scenes.

This miniature of Shiva and Parvati combines the traits of both Guler and Chamba paintings. The artist has portrayed well the ever wandering god and his uncomplaining, faithful spouse who follows her lord all over. Parvati wears the characteristic Pahari costume. Shiva here is not the terrible deity who haunts the cremation grounds, although the garland of skulls reminds the viewer of that. Other than that, he looks supremely majestic in presence and bearing. Shiva wears serpents in his neck and hair. He and his spouse wear exquisite jewellery. The faces, though minutely detailed, tend to the heavy, dull looking and lack vivacity.

The ostentatious setting and the bolsters clash with the simplicity of Shiva's tiger skin spread and his ascetic image. The background is dark, having horizontal clouds with rounded ends. An extensive use of golden pigment makes this painting a rich visual.