The Science of Natural History Elevated to the Status of Art 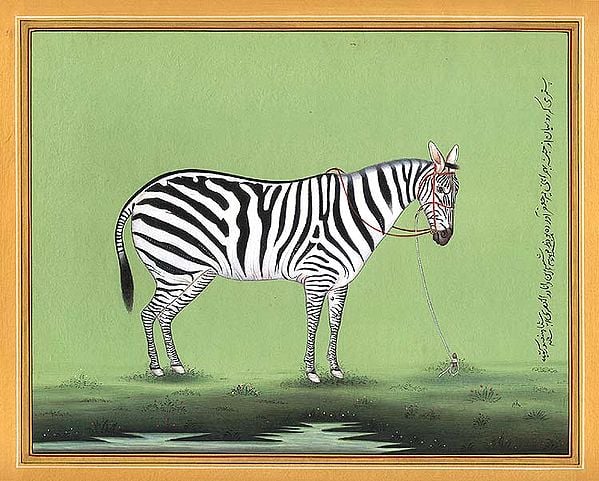 $140.00FREE Delivery
This item can be backordered
Time required to recreate this artwork
6 to 8 weeks
Advance to be paid now
$28.00 (20%)
Balance to be paid once product is ready
$112.00
Notify me when this item is available
The Zebra (Equus grevyi) was first brought into India at the court of Jahangir, the fourth Mughal emperor (reigned: 1605-27), in 1621. It was presented to him on the occasion of his sixteenth accession anniversary. The exotic markings on the animal's body did not fail to elicit the king's admiration for the Creator. "One might say," wrote the emperor, "that the painter of fate has with the pen of novelty bequeathed to the album of existence a masterpiece." He described this "exceedingly strange animal" as follows: "From the tip of the nose to the end of the tail and from the lobe of the ear to the top of the hooves, black stripes, large or small... as suited to various parts, bedecked its body. Black lines ran gracefully around its eyes."

Jahangir's keen eye observed the intriguing correspondence between the pattern of stripes of the zebra and the tiger. The former, we are informed, "is striped exactly like the black and yellow tiger, except that this is black and white. Since some doubted that the black stripes had been painted onto its body, an inquiry was instantly ordered. After inquiry into the truth, it became certain that they (the lines) were by the Creator of the World".

Kailash Raj, perhaps India's finest living miniature artist today, captures the essence of this fascinating animal with characteristic dexterity. Not only are the stripes rendered naturalistically, detailed attention has been paid to the minutest detail including the bushy tail, erect ears and the slight shading of the mouth. Besides the features of the animal, the tether binding it to the nail on the ground is also realistically rendered. Truly a case of natural history being elevated raised to the status of art.

All quotations are from 'The Tuzuk-I-Jahangiri' or Memoirs of Jahangir, translated by Alexander Rogers and Henry Beveridge.