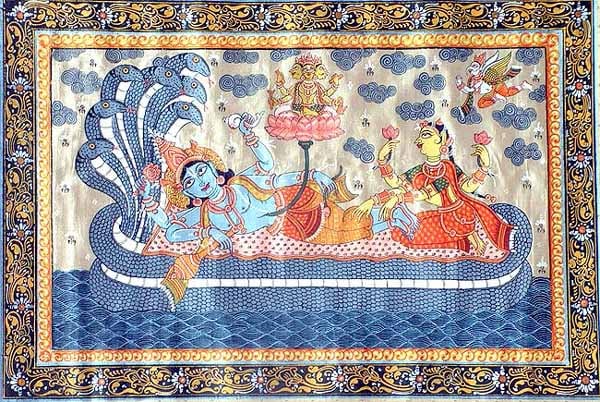 $75.00FREE Delivery
This item can be backordered
Time required to recreate this artwork
6 to 8 weeks
Advance to be paid now
$15.00 (20%)
Balance to be paid once product is ready
$60.00
Notify me when this item is available
Creation is visualized as Vishnu asleep, lying on the snake Sesha. Vishnu is here perceived as the source of the universe.

Here, Lord Vishnu relaxes in the coils of the seven headed serpent. From his navel emerges the flowering lotus and from the petals is shown the emergence of Lord Brahma. Vishnu in his incarnation as guide and savior first appears in the world in a form which is linked with creation myths. The four hands hold the key attributes associated with Vishnu. The conch represents the creative spiral, the discus symbolizes the power of the mind, the lotus symbolizes the egg of nescience and the mace is said to symbolize the power of knowledge.

Caressing Vishnu's feet is his consort Lakshmi. She represents prosperity and bounty, and is worshipped to ensure blessings and affluence. On the right side corner of the painting can be seen Garuda, Vishnu's vahana. Garuda has wings and a birdlike human head with a curved beak. Due to his flight across the heavens, Garuda is regarded as a solar symbol. The figures of gods and the goddess are depicted in bright and eye-catching colours. The grayish blue of the waters and the grey serpent skin are almost identical. The curling clouds in the background are also shown in grey thereby distinctly dividing the colour zones.