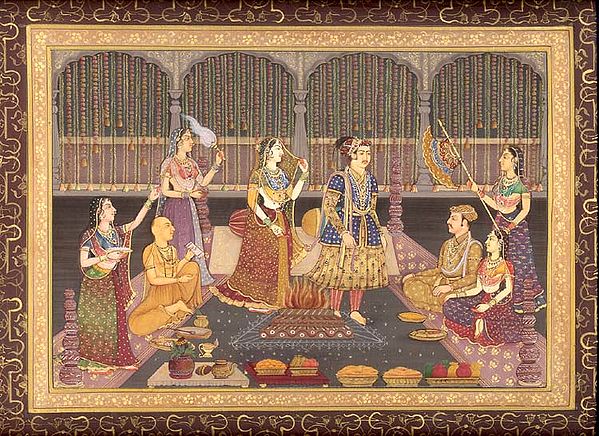 $345.00FREE Delivery
This item can be backordered
Time required to recreate this artwork
6 to 8 weeks
Advance to be paid now
$69.00 (20%)
Balance to be paid once product is ready
$276.00
Notify me when this item is available
This splendid work of art rendered with great ingenuity blending elements of Mughal and Rajput styles, depicts a royal marriage. Instead of a crowded scene, the marriage is being performed as a strictly private affair. History records a number of occasions when for security reasons, or under threats, princes were required to perform their marriage rites in secrecy and hurriedly. The anxiety ridden face of bride's father and the sadness lurking in mother's eyes, reveal that they are forced to marry their daughter in urgency. Apparently, someone of their rival states has threatened to forcibly take away their daughter and marry her against their will, only to slight them. They are, hence, marrying her in haste to a prince of their choice to avert this threat. There loom on all faces, from those of the wedding couple and purohit to the attending maids, a feeling of fearful anxiety. The atmosphere is not charged with the kind of jubilation, which the performance of marriage in Indian tradition has associated with it.

The princely groom, clad in a Jahangiri turban and Mughalia jama and adorned with lavish rich glaring jewels, is leading a royal damsel around a fireplace, which is obviously the ritual havana-kunda. The large eyed and sharp-featured princess has on her person rich costume of Rajput character and is bejeweled with diamonds, rubies, emeralds, sapphires, pearls and other precious stones and gold. Towards the left of the wedding couple are seated bride's parents, the mother and the father. The strict Jahangiri turban, jama, style of mustaches and hair and Mughalia features of the father and the rich royal costume and jewels of the mother speak of their kingly status. The ritual trays, lying before them, required for performance of kanya-dana, the final step of marriage rites, in which bride's mother and father give their daughter away to her groom, suggest that they are bride's parents and marriage is being performed at their palace. The purohit, clad in saffron and rudraksha beads, seated on wedding couple's right, is reading wedding hymns out of the pothi, which he is carrying in his left hand. The maid attending on the royal couple is carrying a fan fitted with the traditional standard-type golden rod, the other attending on the wedding couple has a flywhisk cast of yak-tail in Mughalia fashion and the third one is showering flowers from a tray, which she is carrying in her right hand.

The scene depicted in the painting is that of the bhanwara, or sataphere, which finally consecrate a marriage. The wedding couple, the bride and her groom, is circumambulating the ritual fire ablaze in the havana-kunda. The sash of the prince is knotted with the odhani of the princess. In Indian tradition, the male has his place on the right and the female on his left. In strict adherence to this, the prince has the ritual sash on his right shoulder, whereas the bride has the left end of her odhani tied to it. The bhanwara consists of seven circumambulating rounds around the pole or axis, symbolised variedly by ritual fire, auspicious tree, holy book and the like. The bride leads in the first four and the groom in the last three. Obviously, the painting depicts the final stage of bhanwara. The significance of seven has been further emphasised in the painting by seven pots on each side. These pots are empty, as only after the wedding couple has completed sataphere, the seven rounds, the pot, symbolising the earth, motherhood, fertility, fruition and the ultimate of married life, will fill and become absolute, for symbolising which the artist has installed on the chawki a poorna-ghata, or the absolute pot, with mango leaves, coconut and swastika mark, which stand for fertility, fruition and auspices.