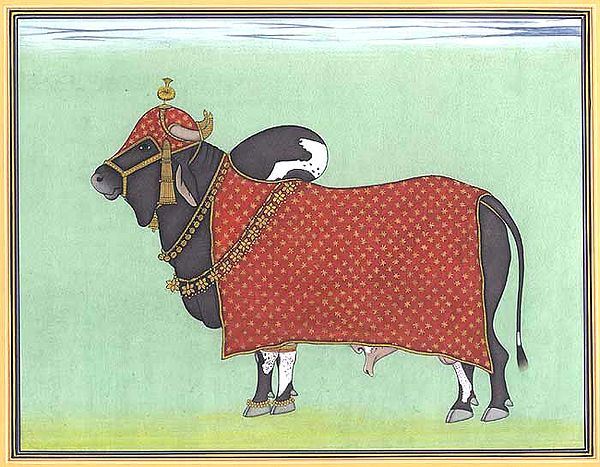 $135.00FREE Delivery
This item can be backordered
Time required to recreate this artwork
6 to 8 weeks
Advance to be paid now
$27.00 (20%)
Balance to be paid once product is ready
$108.00
Notify me when this item is available
In Hindu mythology, animals occupy an important place & are considered sacred due to their association with the deities. They are regarded as vahana or vehicles upon which these gods & goddesses travel.

Nandi, the bull is the vehicle of Shiva and thus worshipped too. As is known, Nandi was the chief of the ganas before Shiva gave this function to Ganesha. Nandi cut of the head of Airavat, the elephant of Indra so that Shiva could fix it on the body of Parvati's son.

In this picture, Nandi looks unlike its natural counterparts - the virile beasts that wonder across the pastures looking for mates or ready to gore to death a rival with its mighty horns. Shiva's bull is tame & meek as it stands here .A bull with a linga shaped hump, seemed a natural choice for Shiva's vehicle and insignia.

Against a green background, wherein the artist has given an impression of the ground and the horizon, stands majestically, a brownish grey bull. It wears a brilliant red over cloth covering its back and a part of its head .It also wears a necklace of tiny bells in its neck and one with floral patterns which reaches behind its dorsal hump. An elegant tiara is adjusted along its horns which are also capped in ornaments at the edge. Tassels hang down from both sides of the horns .The forelegs are decorated with strings of tinkle bells, the sight of Shiva's favourite.

Devotees at a Shiva shrine often touch the loins and flanks of Shiva's bull, seeking both its strength & restraint. They also try to view the Shiva linga through the horns of Nandi, thereby gaining the perfect perspective of the cosmic lord.