Shiva's Dance of Creation and Destruction 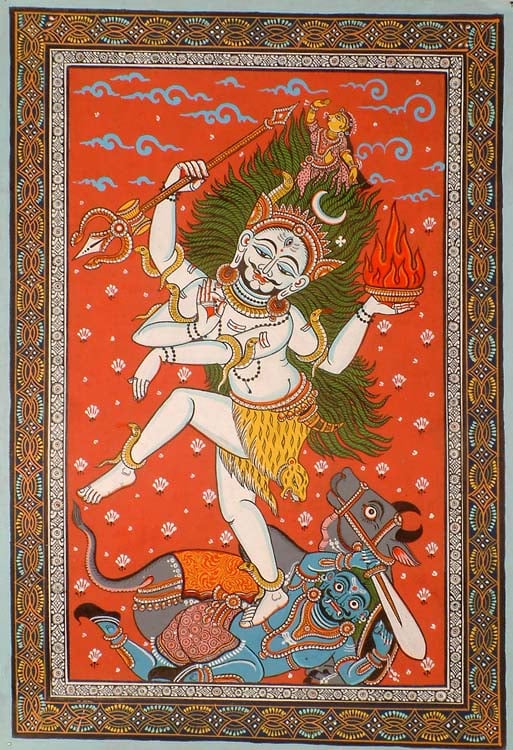 $135.00FREE Delivery
This item can be backordered
Time required to recreate this artwork
6 to 8 weeks
Advance to be paid now
$27.00 (20%)
Balance to be paid once product is ready
$108.00
Notify me when this item is available
Shiva is the god of life and death, of destruction and rebirth. He is also a deity with many forms, depending on the needs of the world. For the artist here, Shiva is the inspired dancer, Natesha, fountainhead of all art forms.

Shiva's dance form elevated him to the position of Nataraja, a form wherein the arms whirled wildly, his flying locks crashed into heavenly bodies, and his steps split the mountains. We see Shiva dance over the body of Mahisa, who was eventually destroyed by Durga. In his right hand, he holds the trident, which represents the triad of the creator, preserver and the destroyer. The presence of the rattle drum is significant as it makes the final sound of death and produces the primeval reverberation of life. In his left hand, Shiva holds the fire that burns and destroys, yet illuminates and energizes. Shiva has snakes around his body, showing his power to deal with death and also to hold the sexual energy of Kundalini, the yogic serpent power. In the disheveled hair of Shiva can be seen the anthropomorphic form of river Ganga.