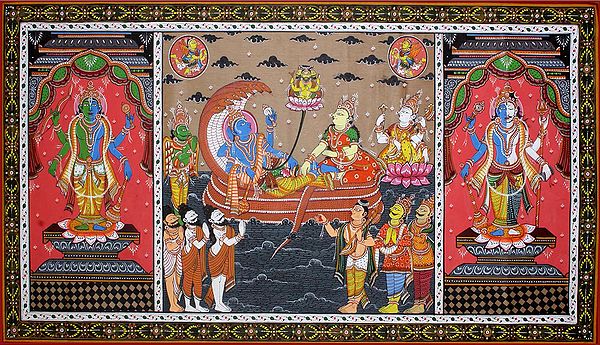 $195.00FREE Delivery
This item can be backordered
Time required to recreate this artwork
6 to 8 weeks
Advance to be paid now
$39.00 (20%)
Balance to be paid once product is ready
$156.00
Notify me when this item is available
Vishnu, the Supreme Being, is the preserver, the protector of the good and the guardian of dharma. But, to begin with, he was a solar deity who rapidly grew in stature to become one of the prominent gods of the Hindu pantheon.

This large sized pata-chitra is divided into three sections, each carrying an important depiction of Vishnu. The central one, which is larger in comparison, depicts Vishnu in shayana (resting) mudra, reclining on the coils of Sheshnag, the endless serpent. Brahma blossoms from the lotus that emerges from Vishnu's navel. Lakshmi is seated, caressing his feet. Saraswati is placed close to her on a lotus floating in the cosmic waters. On the other side, behind the multiple hoods of the serpent, stands Garuda in obeisance. In the foreground are Narada, other sages and gods who have come to pay regards to Vishnu.

On the two sides of the middle section are composite images of Vishnu. On the left, standing on a lotus pedestal is Vishnu part of him painted green, holding Rama's attributes and the other half blue, holding Vishnu's own attributes. The image on the right is that of Hari-Hara, with the left half blue representing Vishnu & the other half ashen, representing Shiva holding a trishula and a damaru.