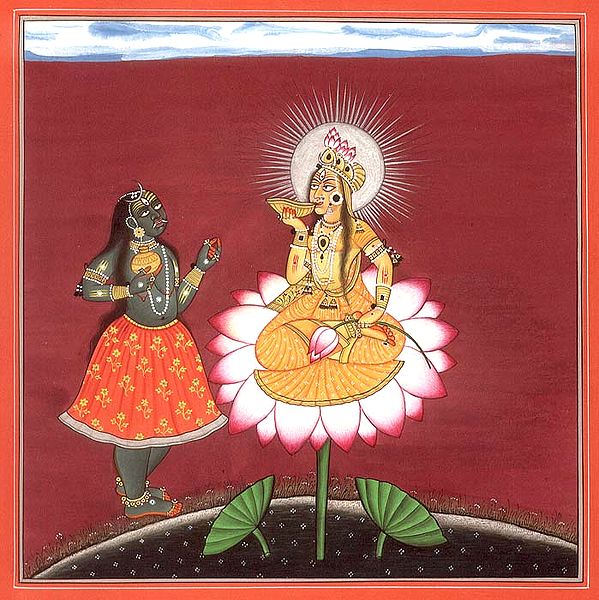 $195.00FREE Delivery
This item can be backordered
Time required to recreate this artwork
6 to 8 weeks
Advance to be paid now
$39.00 (20%)
Balance to be paid once product is ready
$156.00
Notify me when this item is available
This painting shows the predominance of the benevolent form of devi (goddess) over the wrathful one. The Goddess personified as Siddha Lakshmi, a higher form of 'perfected' Lakshmi, sits upon the open petals of a full-blown lotus, springing up from a pool below. She drinks an offering of holy water, and holds the lotus flower, a typical attribute of Goddess Lakshmi, against her hennaed foot. Standing near her is Kali, the Great Goddess of destruction. Contrary to her usual representations showing her as dominant, here Kali stands unusually domesticated, reverent to the goddess seated on the flower. But both goddesses are not antagonistic to each other as evidenced by the golden water pot Kali holds in her hand, from which she has poured out the holy water for Siddha Lakshmi to drink. It is as if Lakshmi's soothing presence has calmed Kali's own vigorous and violent energy. This is further exemplified in Kali's well-groomed hair rather than her usual unkempt self, her decorated skirt rather than one made up of severed hands, and finally the beautiful necklaces of pearls, contrary to the one composed of severed heads which she usually wears.

Other Paintings of this Series:

Bhadrakali, Destroyer of the Universe

Sri Sri Ramakrishna Kathamrita: According to M. (Mahendra) a Son of the Lord and Disciple (Set of 5 Volumes)
By Dharm Pal Gupta
$155.00
FREE Delivery