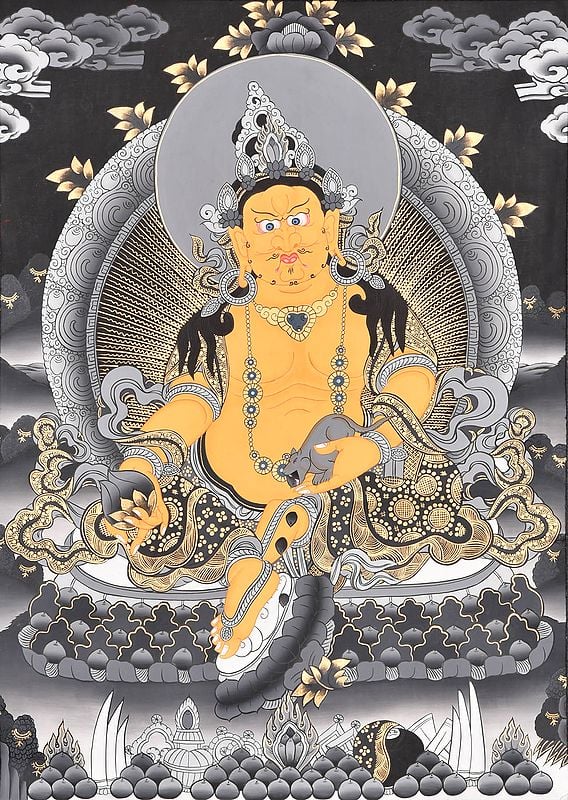 FREE Delivery
Only 1 available
$206.25
$275
(25% off)
Kubera is the Lord of Wealth, a god-king with origins in Hindu mythology. In Buddhism, he is also called Vaishravana. Kubera is also a lord among the yakshas or nature spirits, those that live the mountainsides and forests of Mt Sumeru, the spiritual center of the universe. As a protector-king among the Lokapalas, he is said to govern and protect one of the cardinal directions of the world, the North. Among these four Lokapala (Guardians of the Directions), he is considered the king of kings, the one looks after the domain of wealth. He is both a warrior-protector and a god of wealth, and this thangka showcased him as the lord of affluence. In this image, he is depicted in yellow, wearing a crown, fine garments, as well as gold and jewels.

He is traditionally depicted as plump yet surrounded with luxury. He is also drawn wearing a five-pronged crown a sign of the Five Transcendental Buddhas. One of Kubera’s defining elements is the citron fruit he is holding. In Hinduism, he is usually depicted carrying a parasol, but in Buddhism, as seen in this thangka, he holds a citron from the Jambhara tree. He is seen seated on a lotus throne, a foot resting on top of a conch shell on top of another lotus, both of which are notable symbols of Buddhism. The conch represents the sound of the universe while the lotus is a symbol of purity. Zoom in on his left hand and a mongoose can be seen ejecting a jewel. This is symbolic of Kubera being a god of wealth and at the same time a signal of his victory against the Nagas (snakes). The latter are natural enemies of the mongoose and symbolizes greed. At the bottom of the thangka are offerings for the deity.