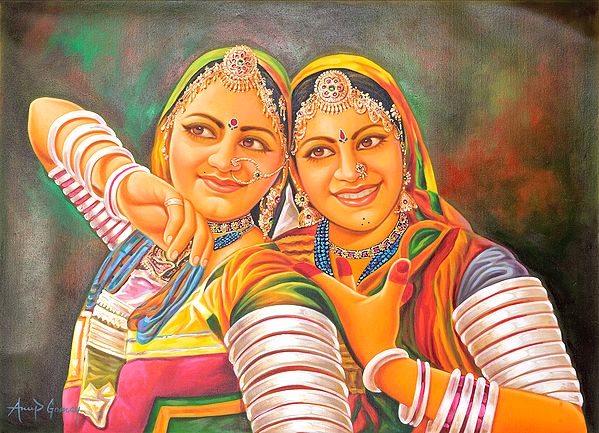 The painting, a contemporary work in oil on canvas, represents two Rajasthani tribal women in light mood, boldly modelled, vigorous and lively as if ready to walk out of the canvas right now. Seated either over a large window or on the terrace of their house they are making fun of a friend passing across in the street below; maybe, with their sensuous gestures they are drawing attention of a passer-by. As suggests lavishness and abundance of the ornaments on their persons, gestures of their hands and fingers, bearings of their faces and eyes, the style of costumes and their overall life style – all invitingly sensuous, the two damsels are in every likeliness Bedia women, a tribe earning its bread by dancing. Unlike a nomadic tribe that moves from one place to other for livelihood now for many generations Bedias have their permanent settlements in different parts of India. Their settlements are as a rule away from a village population and consist of a few houses. Anthropological researches claim that the tribe hailed originally from Chhota Nagpur plateau and some other regions of Jharkhand but now their greater concentrations are in Rajasthan and Madhya Pradesh, and more so around where the boundaries of the two states join – Dhaulpur, Kota and Bhilwada in Rajasthan and Mandsaur and Neemuch in Madhya Pradesh in particular. The two women’s Rajasthani links reflect also in their ornaments, particularly silver rings covering their arms up to shoulders and their typical costumes.    Bedias are a tribe but unlike other tribes they have been at least till mid-twentieth century a professional people, their women folk – popularly known as Bedanis, skilled in dancing, and men, in accompanying them on instruments. But for these seven-eight decades the dance of a Bedia woman was considered to add colours to Holi like social celebrations and imparted distinction to a marriage in the family of a village chief or village rich and remained in talks for long time.


Anup Gomay, a contemporary artist with rare talent for portraying beauty often enshrining a mythical figure or a tribe’s woman, has portrayed on his canvas the two young women so characteristically that their identity and class-character is itself revealed. For a more realistic portrayal as well as for greater focus he has drawn the two figures, or rather their halves, against a deep maroon background with no form that diverted eye away from the main theme except some shading in colours. The painting is a brilliant idiom of beauty endowed with rare simplicity, naïve freshness and great vigour, each stroke of the artist’s brush bursting with glow and energy. Conceived with gold-like glistening skin, round faces, large brownish eyes, beautifully trimmed eyebrows, bold features, proportionate lips, rounded chins, broad foreheads …, both damsels are in the prime of their youth. A strange combination, while the gesture of their hands – an arm lifted in a posture of dance, and the other’s fingers, twisted into rhythm, motivate sensuously, the mischief floating in their eyes and in the demeanour of their faces, reveal their child-like innocence. Both figures are adorned in traditional Rajasthani jewellery – ornaments composed of bold and large semi-precious stones embedded in gold for forehead, neck and ears along laces of beads considered to have amulet-like mesmeric influence and typical arms rings of silver considered highly auspicious. Alike, they are putting on exceptionally bright multi-coloured ‘odhanis’ – upper wears, and ‘cholis’ – breast-bands.
This description by Prof. P.C. Jain and Dr Daljeet. Prof. Jain specializes on the aesthetics of ancient Indian literature. Dr Daljeet is the chief curator of the Visual Arts Gallery at the National Museum of India, New Delhi. They have both collaborated on numerous books on Indian art and culture. 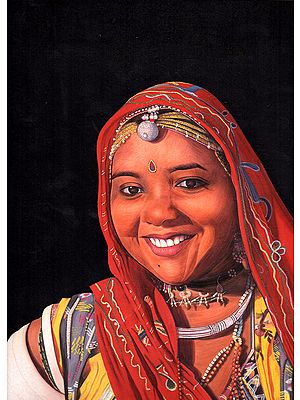 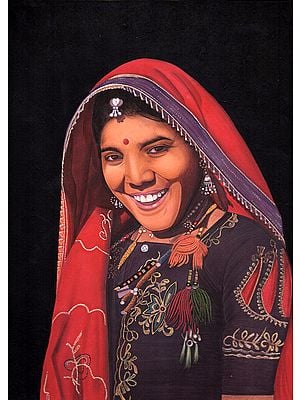 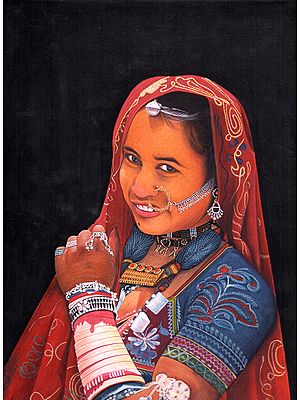