The Union of Shiva and Shakti 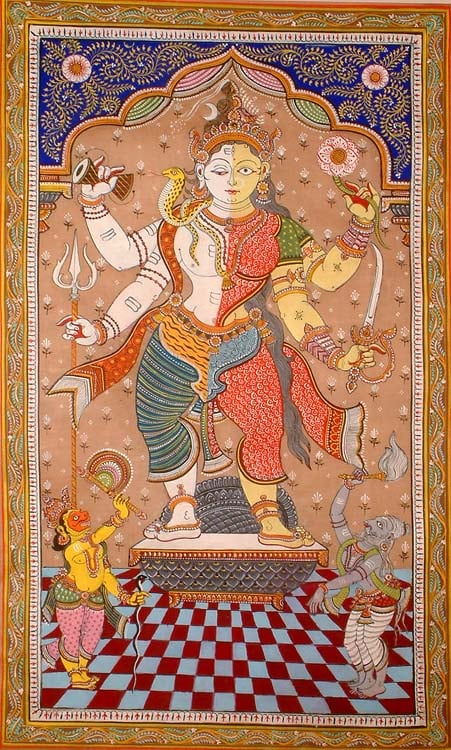 $180.00FREE Delivery
This item can be backordered
Time required to recreate this artwork
6 to 8 weeks
Advance to be paid now
$36.00 (20%)
Balance to be paid once product is ready
$144.00
Notify me when this item is available
Adi Shankaracharya in his Saundaryalahiri claims that only When Shiva is united with Shakti that he acquires the capability of becoming the Lord of the Universe. Shiva is pervaded by the power of Parvati and she is pervaded by the power of Shiva. So, Ardhnarishvara incorporates a synthesis of opposites and on the other integrates the opposites to show that they complement each other.

In this representation of Ardhanarishvara, the body is shown as a complete whole divided vertically into two equal parts  the left half shows him as a male, while the right half represents his shakti in the female form of Parvati. If Shiva has a matted crown, Parvati wears here tresses loose; the former holds the trident and a drum, the latter holds a lotus and a sword. In essence, Shiva is both, male and female, spirit and matter, the seed and the womb of the universe.

It is a compositionally well-balanced painting. The two halves coalesce smoothly into one another. The flowing shoulder cloth of Shiva is balanced by the flowing tresses of Parvati; weapon with weapon. A hermit and a gana stand attendant on either side of the Ardhanarishvara image.