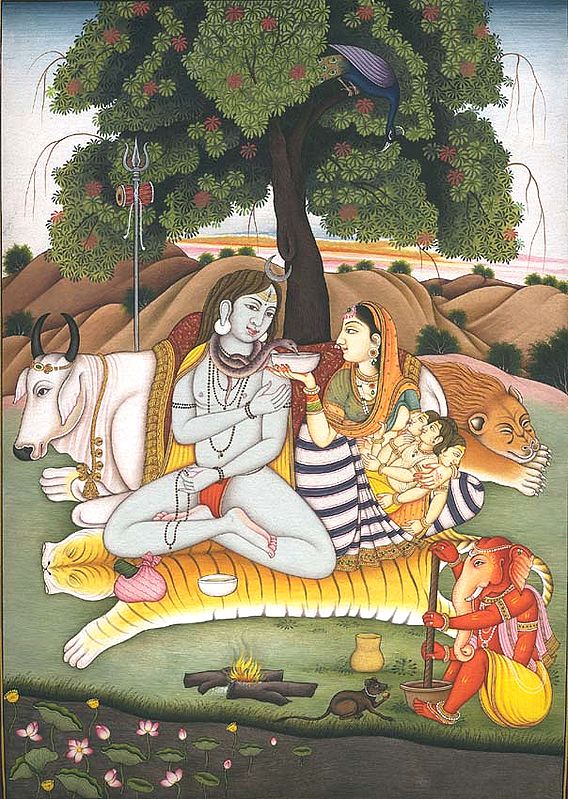 $635.00FREE Delivery
This item can be backordered
Time required to recreate this artwork
12 to 14 weeks
Advance to be paid now
$127.00 (20%)
Balance to be paid once product is ready
$508.00
Notify me when this item is available
Shiva family, to include not only Shiva, his spouse Parvati, and sons Karttikeya and Ganesh but also the Shiva's Nandi and snakes, Parvati's lion, Karttikeya's peacock and Ganesh' mouse, has been now for centuries, and is still, the most chosen theme of sculptors, casters and miniaturists. With colours, and a wide range of forms, the miniaturist had far greater scope for his ingenuity to work. On his canvas, he has been able to discover in the Shiva family not only the aspects of real life but also all that he could think of, imagine, or weave around him  even queer situations.

A miniature finds Shiva family camping under a tree. A snake comprises his loincloth. Right then, there appear Brahma and Vishnu. Vishnu is on his vehicle Garuda, the great bird and the traditional enemy of snakes. Seeing Garuda arrive, the snake, comprising Shiva's loincloth, flees in fear into an anthill leaving Shiva nude. For saving her husband from disgrace, Parvati tears a part of her sari and with it Shiva protects his privacy. In another representation, Parvati, supporting child Ganesh on her lifted feet, as rural mothers do across the country, is bathing him, and Shiva is pouring water from above. A shivering winter night and the icy Himalayan slope, and Shiva has but an elephant hide to cover the entire family. It covers the children, and for pets he lights a little fire, and the parents pass the night uncovered or partially covered. While journeying from Himalayas to plains, Shiva is carrying Ganesh on his shoulder, and Parvati, Karttikeya. This is for giving some respite to pets, vehicles. Shiva is stitching a lavada for oncoming winter and Parvati is repairing her husband's garland of skulls, a pure family affair. Ganesh is helping the father and Karttikeya mother. Miniatures have portrayed hundreds of such aspects of rural life using the Holy Family as model.

This miniature, rendered using the late eighteenth century Guler idiom of Pahari art, portrays the holy family in absolute bliss. The painting most effectively reveals also the Indian ideal of Vasudhaiva kutumbakam, world a family, as in the painting, the boundaries of kinship, or family, transcend all barriers, natural as well as human. If Parvati, mother, is feeding one child, Karttikeya, from her breast, she is feeding the other, snake, from her bowl, and peacock, leaning from the branch of tree, knows that in the drink it also has its share. Lion, bull, mouse, peacock, and snake, so different in nature, not only coexist but exist in absolute peace and bliss. Shiva's mount Nandi and Parvati's lion are resting calmly under the same tree. It is not a world of master and servant, or man and animal. Ganesh, master, is grinding bhang for his father, while mouse, his vehicle, is enjoying a luddoo.

It is an evening of spring. The sun has set, yet from under the western horizon bursts its glow and renders the western sky pinkish-red. The evening has darkened lake-water but spring blooms in its lotuses. The tree, under which the holy family is camping, a huge Saptaparni, does not have flowers but foliage blooming in colours. Behind the Shiva family, there lay a large hill-range, brown and barren except for a few scattered bushes, suggestive of Himalayan upper ranges. Lord Shiva and Parvati are seated on their usual tiger skin laid over a level green pitch of land. Parvati has Karttikeya in his lap and is feeding him from her left breast Ganesh seated towards the bank of the lake is preparing bhang for his father in a grinding pot. Lest it fell he is holding the pot by his feet. His mouse, sitting near him, is enjoying a luddoo. It is constantly looking at Ganesh to find out what he feels about his luddoo eating. Shiva is wearing only a loincloth, though Parvati is well costumed and bejewelled. Her striped lehenga is quite typical.