Who is Brighter? The Full-Moon, or Shiva Himself? 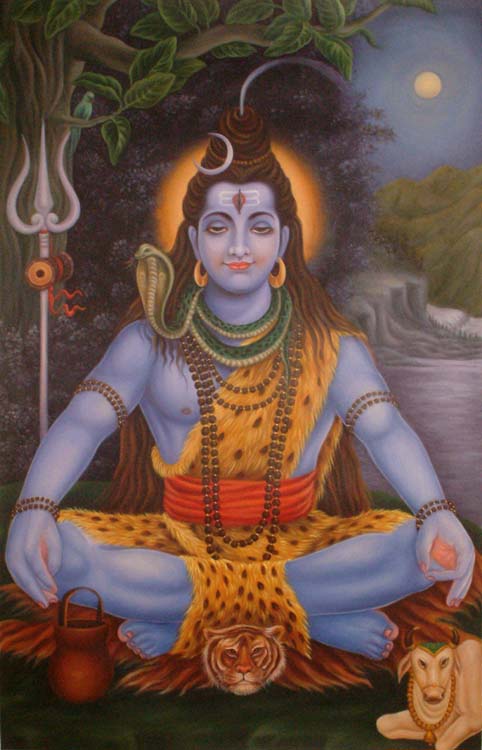 $360.00FREE Delivery
This item can be backordered
Time required to recreate this artwork
4 to 6 weeks
Advance to be paid now
$72.00 (20%)
Balance to be paid once product is ready
$288.00
Notify me when this item is available
Among many other traits, Shiva is also the celibate yogi practicing austerities in the Himalayas.

Using oil based paints, the artist has perfectly portrayed the image of Shiva in meditation. Seated on tiger skin in padmasana, his hands resting on his knees - true posture of a yogi, he meditates. He is dressed in leopard skin; strings of beads hang in his neck and also form his bracelets and armlets; a serpent coils around his neck. Shiva's face reflects the bliss that arises out of supreme attainment. The semi-closed eyes and a benevolent smile show him enjoying the state. Horizontal ash marks decorate his forehead, as does the vertical third eye. Emerging from his matted hair is the Ganga, as the crescent moon looks upon. Where there is Shiva, his trident and his drum can be seen too! In the foreground lie his kamandalu and his vehicle, Nandi the bull looks aggressively ahead.

The scenic background is a commendable work of the artist's aesthetic sensibilities but it is hard to know if the atmosphere is alight because of the full moon or Shiva's aura.