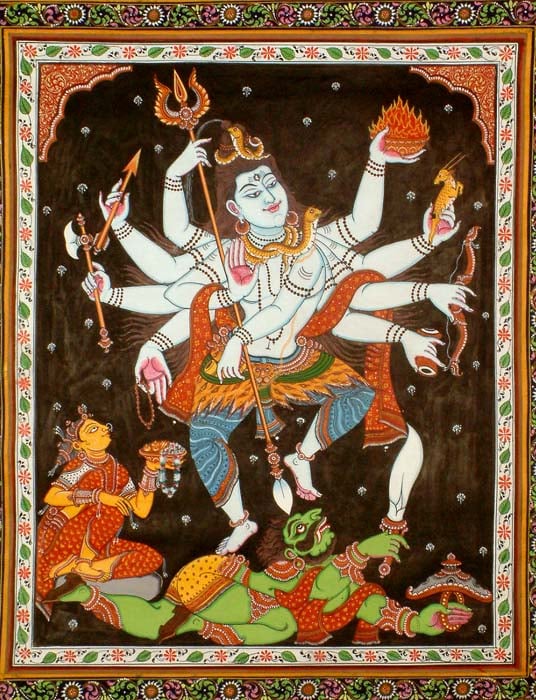 $240.00
This item can be backordered
Time required to recreate this artwork
6 to 8 weeks
Advance to be paid now
$48.00 (20%)
Balance to be paid once product is ready
$192.00
Notify me when this item is available
Save to Wishlist Send as E-card Share by Email
Dance is the supreme art of representation and provides the basis of sculpture and painting. Shiva is associated with dance and is often referred to as 'Nataraja', meaning king of dances.

Shiva is commonly shown performing the cosmic dance tandava, the dance of bliss. But his dance is sometimes destructive as seen in the destruction of Andhaka. The dancing Shiva is shown with ten arms holding attributes commonly connected with him e.g. damaru, fire, an animal etc. He wears necklaces, armlets and bracelets of tulsi beads. His neck and hair is also adorned with serpents. He holds up his hand in a gesture of blessing but his gaze strays away from the viewer.

Beneath his feet lies the demon, defeated, pleading for mercy. Next to the demon sits his consort, with a tray of fruit and flowers, as though anticipating Shiva's victory. Her body posture is as relaxed as Shiva's is violent in movement - though a smile plays on the lips of both. To add to the aggressive nature of the theme, the background is painted black.

Cosmic Artworks That Have Sold Out