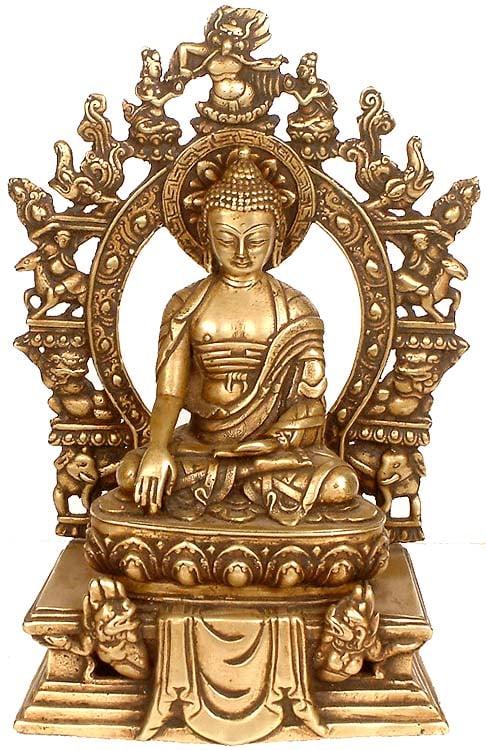 Shakyamuni Buddha is shown here in his customary vajra posture with the right hand making the 'earth-touching' mudra. He is seated on a rectangular pedestal base supported by two lions, with an overhanging altar cloth at the centre.

On either side of the base of the throne are two elephants. On the elephants' backs stand two lions. Above the lions stand two composite animals which resemble the horse in appearance. On the back of the animals sit two young dwarfs, whose hands support a bejewelled crossbeam draped with silk brocade. The dwarf is a symbol of colossal strength in a diminutive stature, and since all of the above animals symbolize strength, speed, and power, the dwarf is their human equivalent.

The crossbeam is capped with an entwined jewel at either end. Two makaras with upturned heads face outwards above the crossbeam, their fabulous 'feathered' tails forming a design of intricate scrolling spiral roundels.

On the makara-tails rest two young naga serpents, with human upper bodies and serpent tails from their waist downwards. At the very top stands Garuda, devouring a long snake while the nagas venerate him.

These six creatures represent the 'six perfections' of the enlightened mind:

1). The two lions at the base represent the perfection of wisdom (prajna).

2). The two elephants represent the perfection of concentration (dhyana).

3). The two dwarfs represent the perfection of effort (virya).

4). The two makaras represent the perfection of patience (kshanti).

5). The two nagas represent the perfection of morality (shila).

An interesting point to observe is that the crossbeam divides the throne into two distinct sections, with the three upper creatures; makara, naga, and Garuda symbolizing the watery, underground and heavenly realms. The lower portion symbolizes the Buddha's conception (elephant), enlightenment (lion), ascent to Tushita heaven (deva), and reconciliation of the faction in the sangha (crossbeam).

Buddha himself is poised in intense introspective concentration. The halo framing his head at the back has eight lotus petals, signifying the eight-fold path of the Dharma. He wears a patchwork monastic robe covering both his shoulders. His body is slim and well proportioned and the facial features are delineated realistically.