10" Temple Hanging: Mayura Lamp In Brass | Handmade | Made In India

Best Seller
FREE Delivery
Only 1 available
$158
Ships in 1-3 days
Notify me when this item is available
A highly artistic brass-piece, a lamp designed to have five wicks or candles, is an auspicious artifact abounding in great sanctity. The artifact is composed of five components, each independently cast and soldered : a base – an upside down decorative bowl or mound-shaped; the lamp-tray with five lamps; a double drum-like stand for the artifact’s principal motif in the centre of the lamp-tray; a decorative peacock icon, the artifact’s main decorative motif; and the chain to hang it on consisting of a number of independently cast loops and a hook styled like a mythical horse : half-horse-half-dragon. Such lamps, as if meant to dedicate light to the light’s Creator, were usually hung in the temples’ prayer halls – a cult prevalent since ages in the entire subcontinent but more popularly in South Indian temples, and even after the emergence of electricity this basic form of light was venerated as the ritual light more close to its Creator. Considered a ritual form of light such lamps were hung also along the ceilings’ of domestic shrines and sometimes in other spaces of a house for its power to purify the ambience and for its ethnicity.

Light is a divine phenomenon, and hence spreading light, a spiritual act manifesting one’s reverence to light and thereby to the light’s Creator. A lamp being its simplest mode, conceiving a lamp, casting, moulding or gifting it, has been venerated, always, everywhere and in every system of thought, as one of the man’s most pious impulses. The lamp’s divine contexts being inherent, the artists/artisans, while innovating a form for a lamp often sought to discover its spiritual/mystic image and aesthetic beauty by blending into its form a divine icon itself, a mystic graphic, an auspicious symbol or object, or an aspect of nature. Some form of Ganesha in divine icons, in mystic graphics, an elephant form, peacock, lion or another bird … in animals, and a lotus or a conventionalized flower form as aspects of nature, are the features most usually associated with forms of lamps. Such decorative/mystic lamps have been in vogue in India since times immemorial.

As evolved in long tradition a lamp-stand or lamp-tray might consist of any number of lamps, usually, one, three, five, seven, nine, eleven or any but usually uneven, each endowed with one symbolic dimension or other, one, dedicated to one Brahma, the entire visible and invisible cosmos being just His manifestations; three, to the Great Trinity: Brahma, Vishnu and Shiva; five, to five cosmic elements, five directions, the fifth being the sky, and to five manifestations of Shiva; seven, to Sapta-Matrikas and Sapta-rishis – seven great sages that seven stars represent; nine, to nine forms of goddess Durga, nine planets, and so on. This lamp-tray consists of five lamps considered as illuminating ‘pancha-bhutas’ – five cosmic elements or constituents of cosmos : earth or creative function, water, fire, space and wind, that is, these five lamps illuminate all five constituents of cosmos and thus the cosmos. Sometimes such lamp-stand is contended to illuminate with its four lamps four directions : east, west, north and south, and with the fifth, sky. The Shaivites see its five lamps dedicated to five manifestations of Sadashiva : Tatpurusha, Vamadeva, Aghora, Sadyojata and Ishan, though sometimes Shiva’s such forms are contended to manifest as five cosmic constituents.

The peacock, an icon of which installed in the lamp’s centre crowns the artifact, is one of the most popular motifs that Indian craftsmen have been using since ages to add to it or rather to many other forms : ornaments, facets of buildings …, greater aesthetic beauty and auspiciousness. The bird, a stylized form raised on a specially erected stand, is the crowning beauty of the artifact and as betrays its posture and expression on the face the proud bird is aware of its significance. Phenomenal beauty apart the peacock has mythical contexts in all major sectarian lines of Hinduism. In Shaivite myths peacock is venerated as the mount of Karttikeya, the Shiva’s elder son. Karttikeya’s consort Kumari also used peacock as her mount. In Vaishnava line peacock is deeply linked with Krishna, one of Vishnu’s incarnations. Brahma’s consort Saraswati used peacock as her seat.

Peacock is now India’s national bird. Not in India alone many countries have for peacock similar love and reverence. In Babylonia and Persia peacock has always been a venerable bird. The kings of Iran called their throne as Peacock Throne. It was under this Persian tradition that the Mughal emperor Shahjahan had named his fabulous seat, considered the ever most expensive in the world, as Peacock Throne. When American broadcasting corporation NBC launched itself, peacock was its logo. Alike, peacock is the logo of Pakistan Television Corporation. 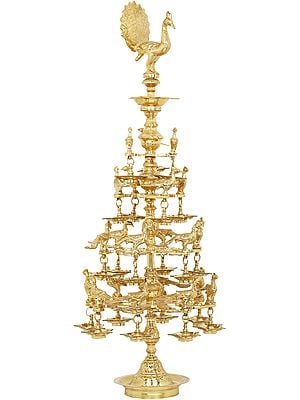 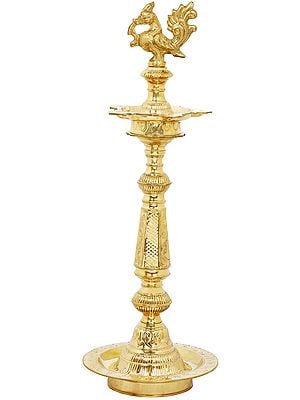 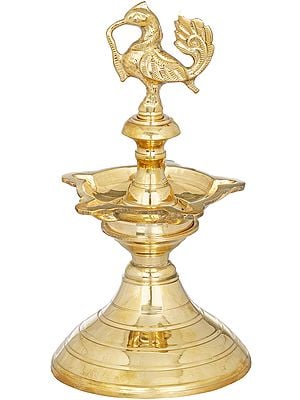 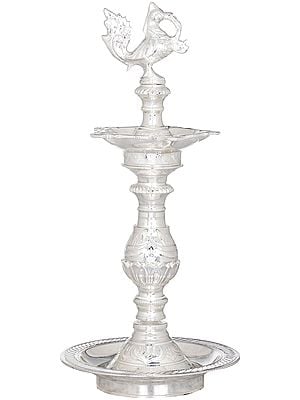 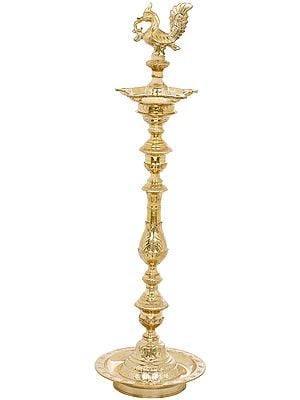 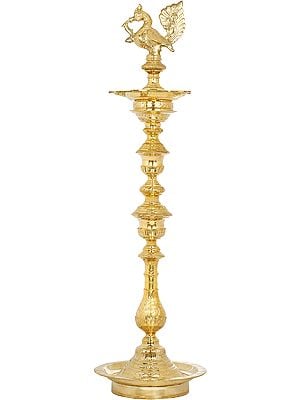 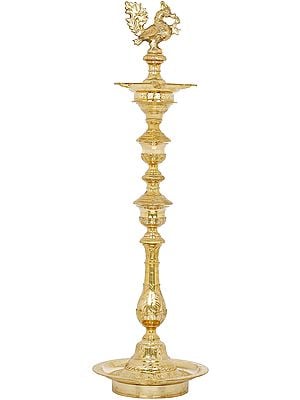 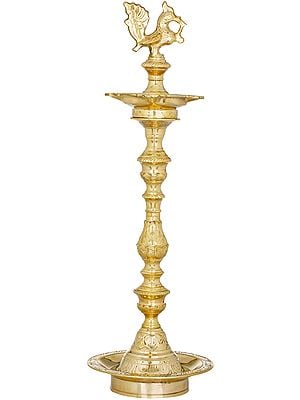 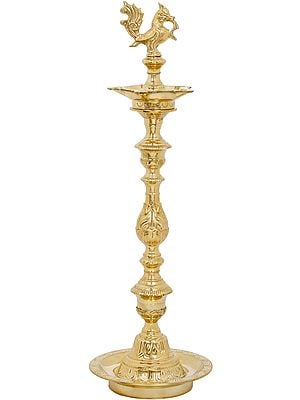 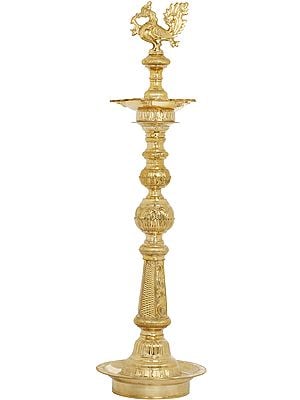 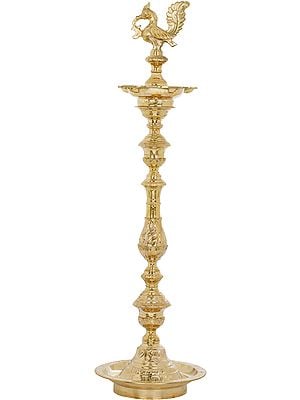 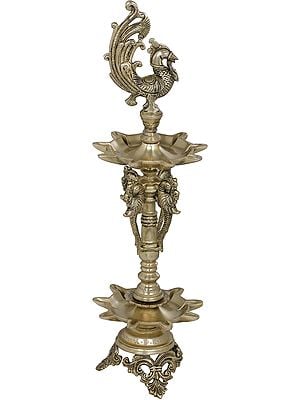 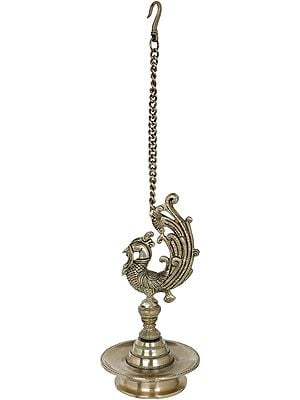 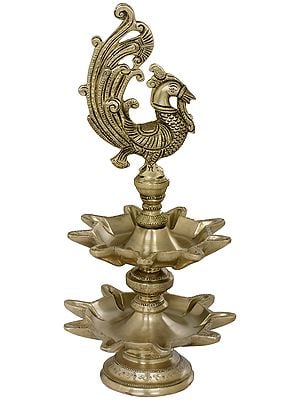 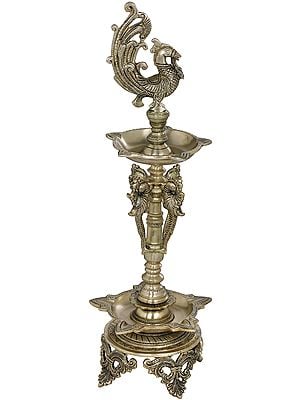