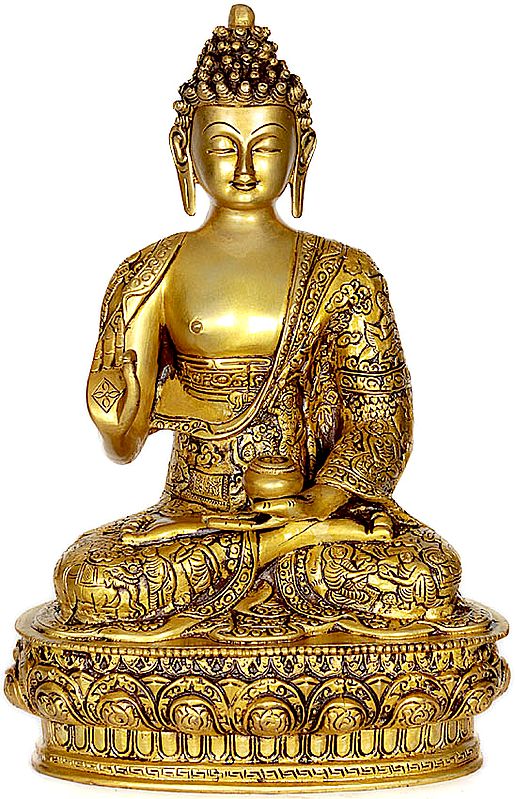 12" Lord Buddha in Brass | Handmade | Made In India

This excellent brass statue with gold-like lustre, an artefact unparalleled in its aestheticism, elegance, minuteness of details, stylistic versatility and spiritual aura, represents Lord Buddha seated in vajrasana – cross-legged posture, on a three-tiered lotus pedestal. Though a blend of more than one form, the statue represents primarily the Buddha as Virochana Buddha, the central one of the five Buddhas, the other being Akshobhya, Amitabha, Ratnasambhava and Amoghasiddhi often considered as emanations of Virochana Buddha.

With his right hand held in ‘vitarka-mudra’ – interpretive posture, the statue represents him as the universal teacher, the Buddha’s final state as a living being. Usually the Buddha’s images in teaching posture are rendered with both hands in ‘vitarka-mudra’. In ‘vitarka-mudra’ the eyes are half-open as in a thoughtful demeanour. With his eyes closed, as in meditation or as engrossed in inner dialogue, the posture in this rendition is slightly different.

Apart, he is holding in his left hand a pot which symbolised in general the abundance of knowledge which as the universal teacher the Buddha imparted, and sometimes, especially in later Tantrika innovations, also his power to bestow worldly riches and happiness. In the Buddha’s iconography the pot in his left hand often symbolised his emanation as the Medicinal Buddha – Bhaisajyaguru, though in such emanation his image is represented as carrying in his other hand or around him also a twig of a herbal creeper or plant. The spiritual aura that the Buddha’s face reveals is in tune with the initial perception of the Buddha’s imagery seeking to represent the Buddha – the Enlightened one, beyond his mortal frame only as Dharma-kaya – the law-incarnate.

The most outstanding and unique feature of the image is its ‘sanghata’ or ‘sanghati’ – robe or sheet lying over his left shoulder, covering his back, a part of the right should and flowing down to his legs skirting around on the pedestal. All over the ‘sanghati’ are carved series of pictures illustrating legends from Buddha’s life from his birth to his Maha Parinirvana. Under the left armpit stands queen Maya, the Buddha’s mother, holding a branch of Sal-tree, obviously at Lumbini, giving birth to the Buddha. A panel close to it on its right represents mother Maya as lying asleep, and around her are carved her auspicious dreams including the elephant Airavata that she saw before the Buddha was born. Towards the left knee the ‘sanghati’ represents Buddha reclining on his right arm – his Maha Parinirvana.

Just close to the Maha Parinirvana panel towards the leg’s lower portion a panel illustrates the Buddha’s Enlightenment with the down-trodden girl Sujata offering him rice-pudding for breaking his fast. He is seated under Bodhi tree and his face has around it the aura of divine light. The left arm has on its upper side an episode from his childhood. Hit by an arrow of his cousin Devadatta a wounded swan fell close to the child Siddhartha, his initial name, and the compassionate Siddhartha taking the bird into his care treated it with ointments and love. On its back a panel depicts his marriage with Yashodhara. Just below the wounded swan panel there is the figure of emaciated Buddha reduced into a skeleton after having fasted for many days. Three of the five panels on the back of the image portray, almost in sequence, his encounters as a prince with an old man, with a sick man, and with a dead body, and consequently his decision to renounce the world.

The fourth, just under the right armpit portrays a young damsel sleeping with her child, obviously his wife Yashodhara and their son Rahul. Renouncing them when yet sleeping the Buddha, a taller princely figure, is seen leaving with long strides. Under the dead-body panel the Buddha is seen cutting his hair with his sword. 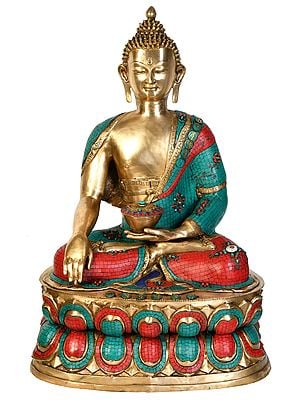 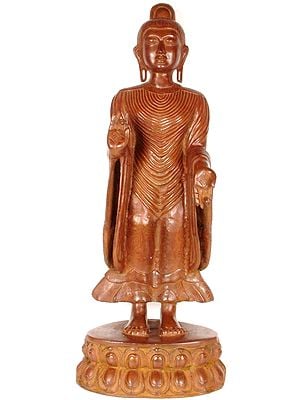 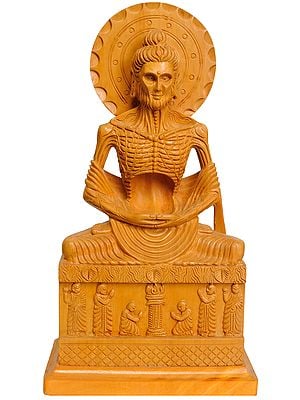 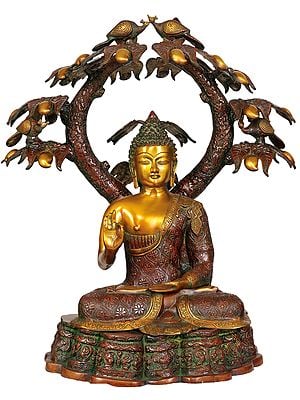 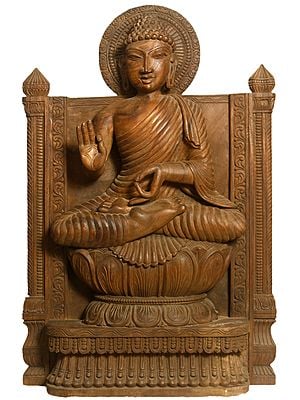 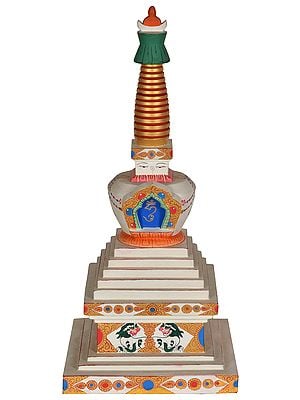 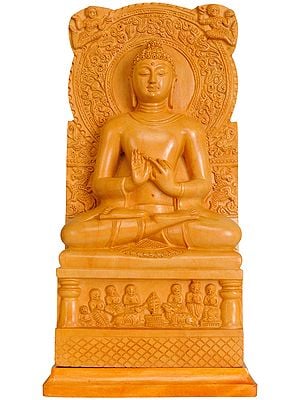 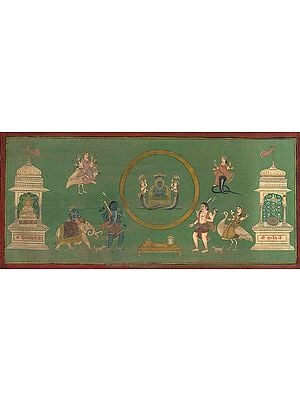 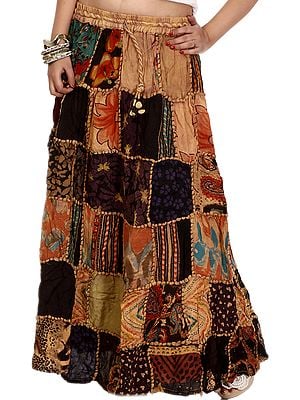 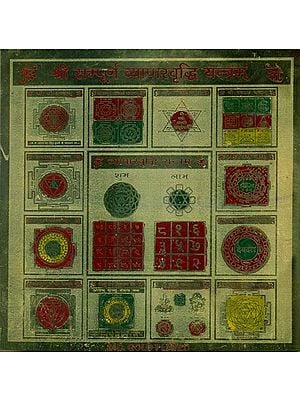 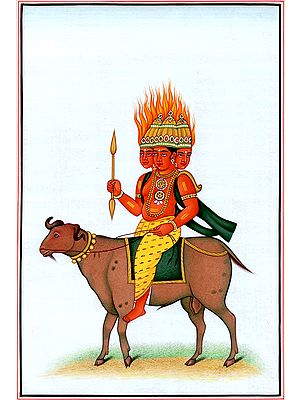 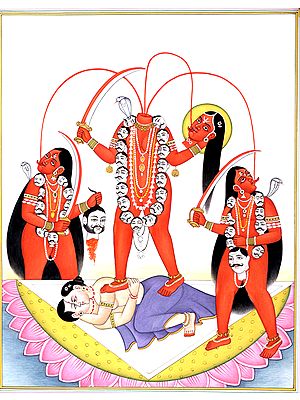 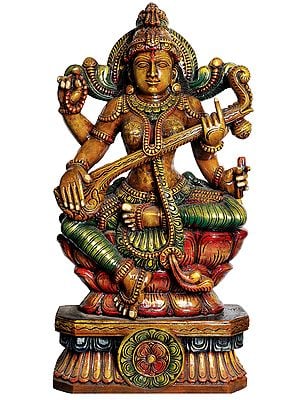 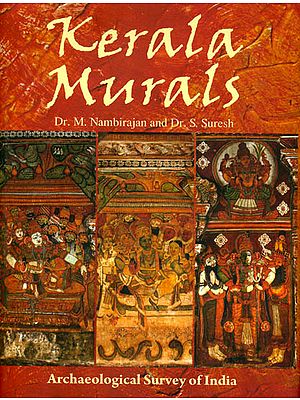 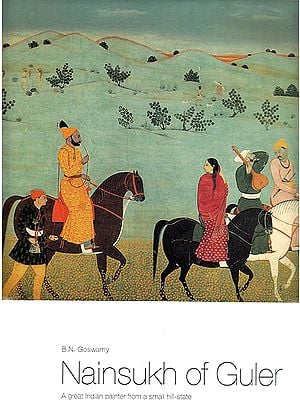 Nainsukh of Guler – A Great Indian Painter from a Small Hill-State
By B.N. Goswamy
$99
FREE Delivery