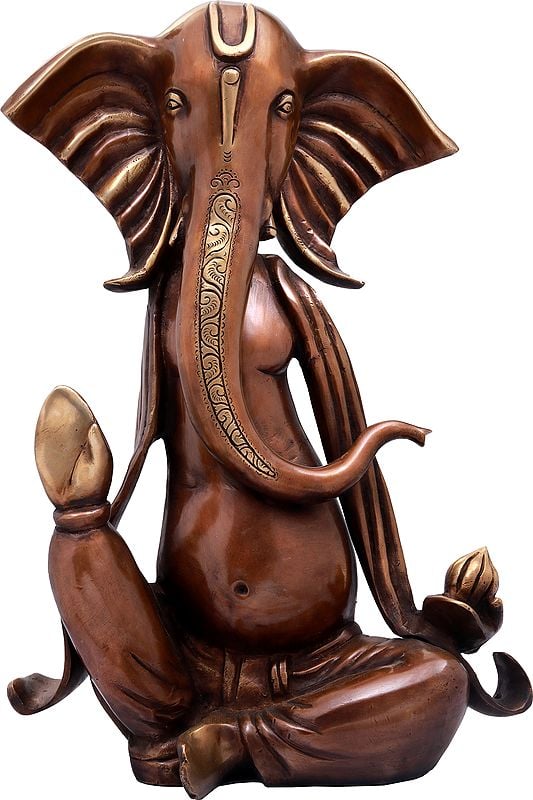 FREE Delivery
Only 1 available
$333.75
$445
(25% off)
Ganesha is the most popular subject of choice for painters and sculptors alike in the subcontinent. He is a boy-deity, the son of Shiva and Parvati, and beloved of the peoples of Southeast Asia. His childlike demeanour is characterised by His chubby form and love for laddoes, so much so that His iconography is incomplete without a bowl of the Indian sweetmeat in one of His hands. This one-of-a-kind sculpture of Ganesha would be an unusual addition to your space. The stylised silhouette and the superbly glossy surface do not interfere with the traditional iconography of the deity.
Ships in 1-3 days
Notify me when this item is available

A graceful tilak marks His temple, reaching all the way down to the base of His long curvaceous trunk. The adornment along the tapering length of His trunk is characterised by brief, rangoli-esque cruves. The eyes on either side of the trunk have all the vigour and innocence of a divine child. The features are given a natural gold-coloured finish that look amazing against the base tan of His complexion. The undulations of His gigantic ears are also coloured the same gold, making it look marvellously lifelike. Note the broken tusk on the left of His face, leading to the very telling name of Ekdanta (meaning 'single-toothed' in Sanskrit).

This Ganesha murti has a long torso, replete with the signature baby fat of His iconography. A long angavastram is draped over His shoulders, which cascades symmetrically down on either side of Him all the way down to His folded legs. The dhoti is tied way below the navel in order to make room for His pot belly, its silken folds as realistic as brass could get. The hands and feet of the deity are a matching gold tone, their delicate shape a fine example of endemic Indian workmanship. Do not miss the sumptuous laddoo on the palm of His left hand.