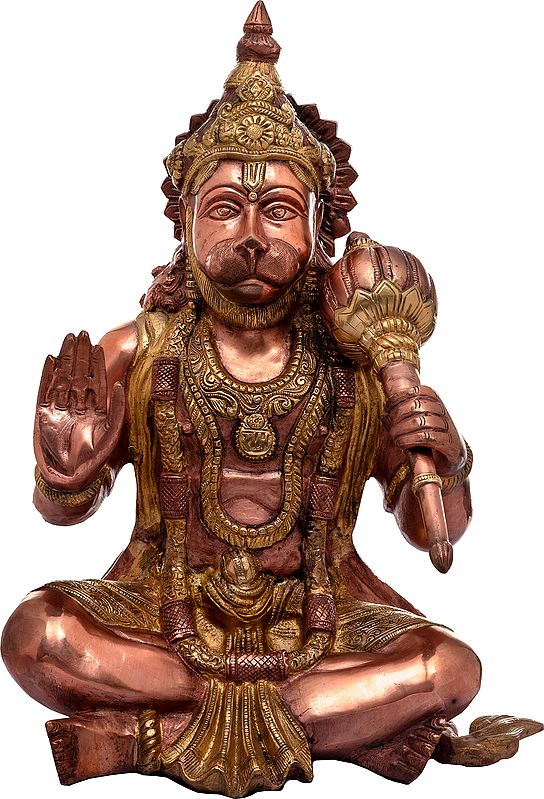 More than 1M+ customers worldwide
This statue of Hanuman representing him seated cross-legged as in Yoga-mudra, and his right hand held granting abhaya – protection from fear, is a form of his image rarely represented in arts, and not much consistent to his personality and overall cult. The most humble divinity Hanuman always claimed for him the status of the Rama’s servant, even that of his emissary only rarely. In some of the moments of crisis he even rescued his master Rama but his humility made him announce only that not a grain of his strength is his own, and whatever he has he draws perpetually from his master. Obviously, the masters’ assumptive posture, as reveals in abhaya-granting mode, could hardly be an humble servant’s bearing. Commemoration of the name of Rama apart, Hanuman is not known to resort to any formal rituals and Yoga like formal practices. Even a sitting posture does not much befit with his overall personality of an alert servant always on heels. Hence, a statue representing him as seated in Yogasana reveals new dimensions of his image.

One possessed of unfathomable knowledge, immeasurable virtues and unparalleled might, as he has been lauded in texts, Hanuman is exceptionally humble, kind and compassionate. Except whatever mythicism, metaphysics, mysticism, or the principles of cosmic unity or oneness of existence that his form : a blend of human and animal aspects, suggests, Hanuman does not have associated with him any philosophy or dogmatism. He seems to have never promoted the cult of rigorous penance, not even one of his devotees in the entire body of mythology ever indulging in it. He is content in being the bridge between his devotee and his master. Such is his humility that his protection is assured even when he is commemorated simply by his name. His mere presence, or name, dispels every evil and leads to success in every walk of life.

One of the most loved Indian deities, and far widely worshipped with a greater number of shrines dedicated to him than to his master Rama, this brass statue represents Hanuman as seated cross-legged with no formal seat, even a simple pedestal, under him, carrying in his left hand his most usual attribute mace, while the right is held in the gesture of granting ‘abhaya’, one, assuring freedom from fear, and other, ensuring it. Though greatly refined, in the style of face with greater emphasis on its monkey-aspect, voluminous and bold figure with tough look, and in heavily conceived ornaments the image reveals Hanuman’s basic ethnic character. As contend many scholars, like Kali Hanuman too was a divinity worshipped since long by aboriginal tribes, and in whatever degree, that ethnicity has been always an inevitable element in his imagery.

The statue cast in fine brass with some parts polished, revealing gold-like lustre, and others : recesses, folds and shaded parts, and details of wears, left unpolished creating by contrast the effects of lines, reveals a painted piece like two-colour effect. The monkey god clad in loincloth, carrying a sash on his shoulders, and putting on the frontal decorative ‘pata’ in the parting of legs trailing down to the foreground, is sitting with a firm posture. His figure has been conceived with an oval face framed with a well-trimmed beard on the lower side, and with the headgear, on the upper. His little projected mouth blends with the monkey face the face of a lion. He has wide open eyes with bows-like arching eyebrows, well fed cheeks and moderately wide forehead with a Vaishnava tilaka mark in the centre. The monkey god is putting on a tall crown and a few ornaments, large size ‘kundalasa’ – ear-ornaments, a broad necklace with a large pendant with ‘Rama’ inscribed on it, a two-laced necklace and a large garland, much like the Vaishnava Vaijayanti, trailing down his lap, and bangles on arms, wrists and ankles. Though with a narrow breadth covering just the groins, the border of the loincloth has been beautifully and elaborately designed using floral and geometric design-motifs.