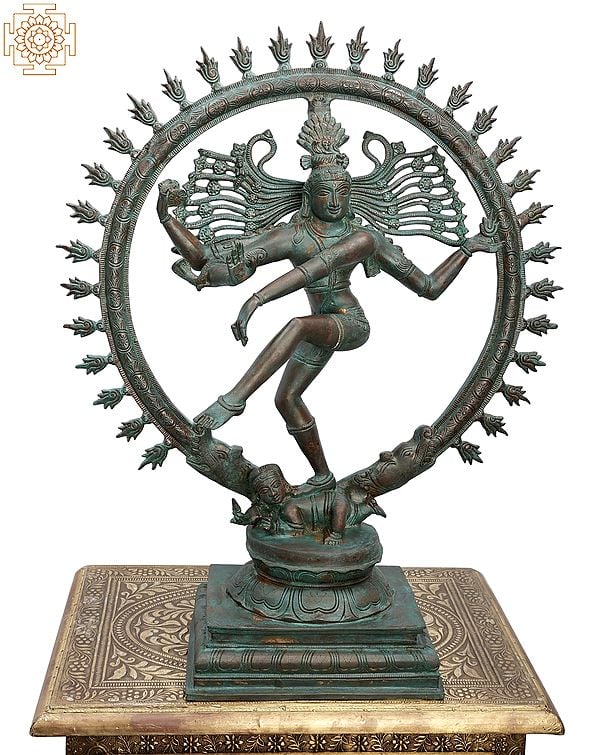 Lord Shiva is the greatest demigod, the spiritual master of the universe, being transcendental to the material nature. He is also the master of the false ego residing in all the living entities of the entire universe. Lord Shiva appears in the form of Nataraja to perform his divine act of Cosmic dance (Tandava). The word Nataraja denotes ‘The King of Dance’; Natya meaning ‘Dance’ and Raja meaning ‘King’. The Nataraja form symbolizes the destruction of the universe. The Lord performs Rudra Tandava to destruct the illusion, evil within the living beings. The destruction is the end of the cycle of birth and death, and the beginning of spiritual enlightenment of the individual souls misguided by Maya (Illusion).

This exquisitely sculpted statue of Lord Nataraja made of brass, illustrates the gestures of the Lord performing the Rudra Tandava. The Lord is wearing a serpent coiled around his neck. He is holding ‘Agni’ (fire) in his posterior left hand which signifies the energetic vibrations for the destruction of the world. His anterior left hand takes the shape of Gajahasta (Elephant hand) or Dandahasta, showering his blessings upon his devotees and extends towards his left leg. There is a snake wrapped in his anterior right arm that represents ‘Abhaya’ (without any fear). His posterior right hand is carrying a musical instrument ‘Dumroo’, which represents time and rhythm. His whirling hair stands out as a fan behind his head as he performs the divine cosmic dance. The Lord is standing on a Lotus pedestal placing his right foot on the demon dwarf ‘Apasmara’, who is the symbol of spiritual ignorance. His left leg is raised above in the air. He is surrounded by a fiery ring ‘Prabha Mandala’ that represents the material world, full of suffering and pain. Thus, this form of Lord shiva ultimately depicts the destruction of the ignorance of all the spirit souls, showing them the path to liberation.