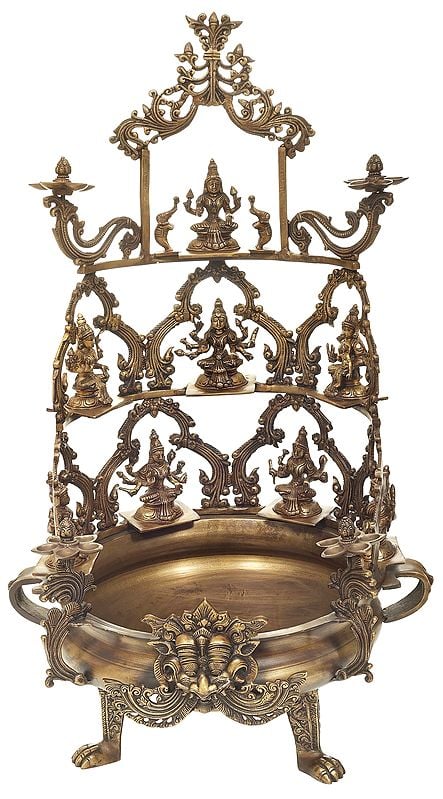 An ashtalakshmi urli such as this one would add to the aesthetics of your space. The urli, an item of traditional Indian home decor, is designed to uplift the beauty of one’s home. The wide-mouthed shallow-bottomed vessel is designed to be filled with freshwater. This compact, makeshift pool is then strewn with the petals of freshly plucked flowers, which then fills the space around it with strong, sweet, natural scents. Also, such an arrangement is as pleasing to the eye as it is soothing to the nose. The urli that you see on this page is a particularly ornate composition. It comes with the ashtalakshmi motif built into the composition, which makes this an auspicious pick for your home or office.

From the rim of the urli’s mouth emerges a network of evergreen vines. These take the shape of miniature aureoles within which are four seated ashtabhujadharini (eight-armed) Devi Lakshmi figurines. On the narrow platform joining the tops of these four vine aureoles are three more seated Lakshmi figurines, each housed within the same style of miniature aureole. All the seven Lakshmi murtis so far are identical to each other. Finally, on the strip of platform that joins these three aureoles is a solitary chaturbhujadharini (four-armed) Lakshmi, flanked by the salutations of the sacred gaja (elephant). Enclosed by pillars on either side, a pair of lamp-trays with a stem of vine are to be found at the zenith of the composition. These are identical to the lamps that flank the Kirtimukham motif down the frontal midline of the body of the urli.