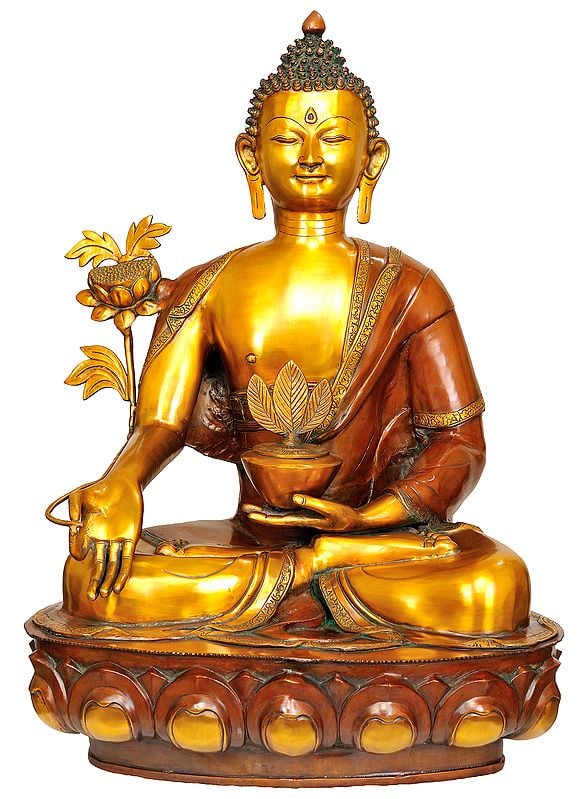 Seated majestically upright, his body taut and stretched like that of an archetypal yogi, the Buddha here sits on a double lotus pedestal. His arms are healthy and strong and the shoulders firm and graceful. The robe covering his two shoulders is plain except for an arabesque border running across the four sides. A knot at the center of the chest holds the drape together.

That the sculptor has deftly carved a robust and strong Buddha is not without reason. In Buddhist art, Buddha is often deified as the archetypal healer and granter of health, popularly known as the Medicine Buddha. His typical iconographical attribute is the right palm facing outwards, and offering, in a gesture of generosity, a stem of the myrobalan plant. This is a healing fruit well known in Tibetan medicine, and a symbol here of the botanical realm's restorative fecundity.

The sculptor has skilfully made his talent evident in the expressive delineation of the fingers of the right hand, which gently grip the medicinal plant, and also of the left, which rests contemplatively in his lap holding a bowl topped with herbs. Buddha sits in the padmasana where the legs are crossed and the soles of the feet upturned. This is a meditative posture. He has a long, yet slightly round face, with a serene and inward looking expression. It is the pair of half-closed eyes, framed by arched eyebrows, that lends this introspective character to the facial demeanour. The ear lobes are exaggeratedly extended, signifying that they were once hung with heavy and rich earrings. That they are now empty suggests that Buddha has renounced his princely status. The aquiline nose is prominent and the thin lips below it pursed in a light smile. On his neck there are curving lines, which symbolize a conch. These are said to represent his deep and resonant voice, through which Buddha introduced his followers to the path of Dharma.

The artist has managed to infuse the entire composition with an aura of intense yet subtle harmony, the defining glory of which is the Buddha's radiant form, glowing with the splendor of both physical and inner well-being.

Shakyamuni Buddha is known as the great physician because he has taught the Dharma which is the antidote to the sickness of suffering within samsara. In fact, it is believed that the Four Noble Truths laid down by him are based on the ancient medical formula of diagnosis, cause, prognosis, and treatment.