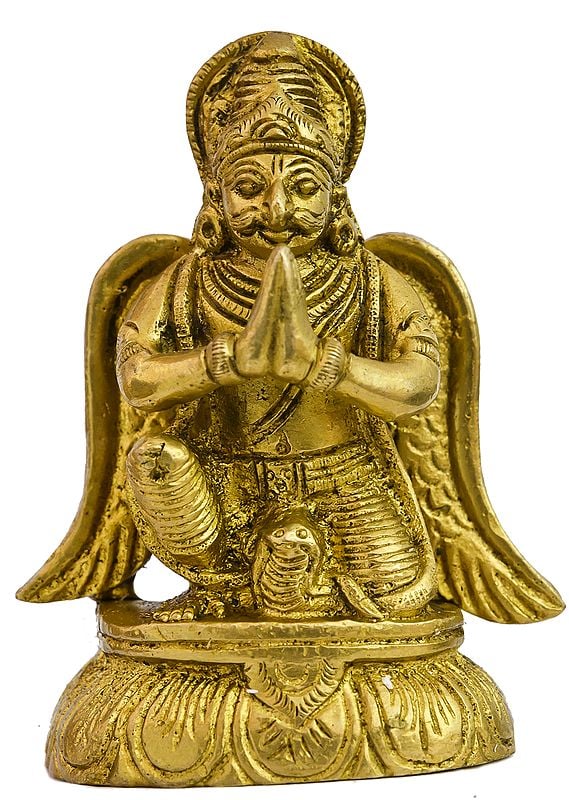 3" Garuda In Brass | Handmade | Made In India

This sculpture depicts the man-bird Garuda, who was not only Vishnu’s animal form and mount but also his chief devotee. Here, Garuda is not shown in conformity with the iconographic conventions as a youth but rather as a grown-up man. He has bird wings and a slightly beaklike nose. He kneels in adoration on a lotus base with his hands in a gesture of respect (Anjali mudra). A halo of curls surrounds his crowned head. Garuda, being the natural enemy of snakes wears serpent ornaments frequently and that can be seen in the sculpture as well, with its head protruding between his legs. The statue has rich luxuriance to its fully modelled and beautifully finished sculptural forms.

While Garuda is also known for his intense flight and being a vehicle of Lord Vishnu, Garuda has a religious significance. Seeing Garuda is considered auspicious in Hindu mythology and it is believed that wherever Garuda is seen hovering, that place becomes sacred. Keeping Garuda images at home brings positivity and helps people succeed in reaching their goals. It is also believed that the Darshana of Garuda on specific days would bring in different results. Garuda on a Sunday would give relief from diseases and solve any confusion. Seeing him on Mondays would bestow family welfare and health. Tuesday would ensure the removal of opposition from enemies. Wednesday would bring success and happiness. Thursday would grant long life. Friday would bestow wealth. Saturday would give liberation.