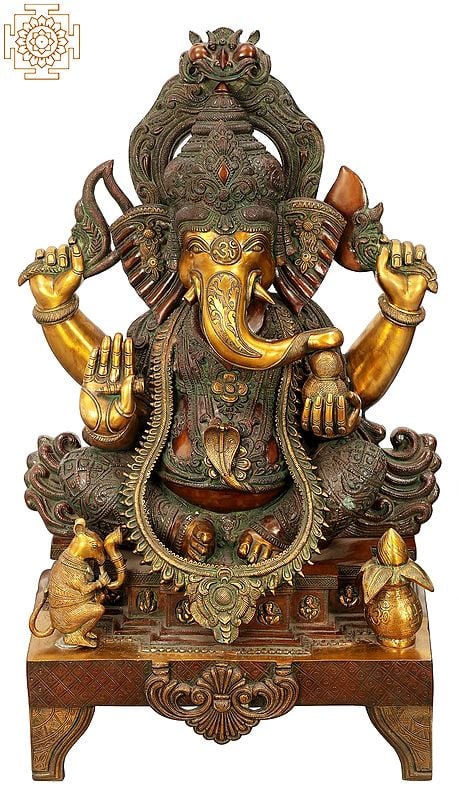 The Sanskrt word ‘ekdanta’ is a portmanteau of ‘ek’, which means one, and ‘danta’, which means teeth. The ekdanta or one-toothed roopa (form) of Lord Ganesha is of special literary significance. According to legend, He is the one to have scribed the epic Mahabharata upon the dictation of its author, Sage Veda Vyasa, by turning a piece of His own tusk into a pen.

In the ekdanta Ganesha that you see on this page, the right tusk of the Lord is broken near the very root. The broken bit is pressed by the thumb against the palm of the right anterior hand, leaving the aashirvada (blessing) mudra intact. The rest of Him is the traditional chaturbhujadhari (four-armed) iconography, bedecked with sumptuous silken clothing and adornment aplenty.

Both the front and the back of this composition have been sculpted with great detail and symmetry. The Lord is seated in a rudimentary bhadrasana upon an ornate chowki. Miniature Ganesha figures are carved into its body. To the right of the Lord’s feet is His vahana, the mouse, in utter supplication; while to the left is a kalasha-and-coconut arrangement indispensable to ritual worship.

This most artistically crafted : cast, plated and anodized, brass-statue, in every likeliness an image for a royal or a rich man’s domestic shrine, exceptionally ornate as are Tibetan and Nepalese images, an example of perfect craftsmanship and endowed with rare beauty, represents Lord Ganesh in his Ekadanta manifestation. He has been represented as seated on a two-tiered ‘chowki’, the rising wall engraved with tiny forms of Ganesh himself, in ‘utkut akasana’, a sitting posture with both legs turned angularly, the feet facing each other in the body’s centre. Not only that the remnant of the broken tusk has been emphatically focused as against the other on the left but with as greater emphasis has been represented the detached part of p>the tusk held in one of the hands of the elephant god.

Obviously, the emphasis is aimed at defining the image as representing the elephant god’s Ekadanta manifestation. In early texts, like the Mudgala Purana, Ekadanta Ganapati has been alluded to as one of his initial eight forms with which the basic classicism of Ganapati imagery comes into being. These eight primary manifestations of Lord Ganesh were conceived as prevailing over eight weaknesses inherent to human nature. Subsequently, the number of such form was expanded into thirty-two but the significance of his Ekadanta form was never diluted. Under this classicism Ekadanta Ganapati is believed to defeat ‘moda’ – arrogance or ego that leads the mind to not accept what one has before him and thus creates disharmony with the world he is destined to live in. Ekadanta Ganapati vanquishes this arrogance, which makes life harmonious with one’s world.

Tradition reveres Ganapati as the supreme patron of knowledge and wisdom; however as Ekadanta he presides over literature, scriptural knowledge and script. His Ekadanta form-related myths are many; however, quite relevant among them is one related to writing the great epic Mahabharata. The Mahabharata-related myth contends that Ekadanta Ganapati was its scribe. As the tradition has it, gods assigned to sage Vyasa the responsibility of writing down the Great Epic. Sage Vyasa accepted it on condition that he was provided with a scribe who wrote down whatever he spoke uninterrupted. After all others failed, gods prayed Ganesh for accomplishing the job. Ganesh agreed but on a counter-condition. He asked that as he would write uninterrupted sage Vyasa would also dictate non-stop. It is said that in the course of writing his pen broke. To keep his words, Ganesh broke his right tusk and using it as pen continued writing and the great text was scribed. Perhaps thus, the precedence of Ganapati-worship over the worship of Saraswati, the goddess of learning, might have begun. The myth also provides the reason as to why, when a child was put into a school, an ivory pen was considered till recent past as the most auspicious tool to initiate learning.

A regular feature of the Ekadanta iconography, he has a four-armed form carrying essentially in the normal right hand his broken tusk as he has in this brass-cast. Varying a little from the iconographic tradition, in two of his other hands he is carrying a noose and an axe, both most artistically designed and cast. In the fourth, Ekadanta usually carries a rosary, the tool of meditation; contrarily, in this statue he is carrying a pot of jewels symbolic of riches but also the unexplored wisdom of which rosary is an effective tool. This form of Ganapati assimilates with his form also the attributes of Kshipra Ganapati and Uddanda Ganapati iconographies, at least the pot of precious jewels, an element used often with these other two forms. Essentially a votive image, the seat the image enshrines has consecrated on it a ‘purna-ghata’, and has on its other corner the Great Lord’s mount mouse blowing a trumpet in the mood of festivity.