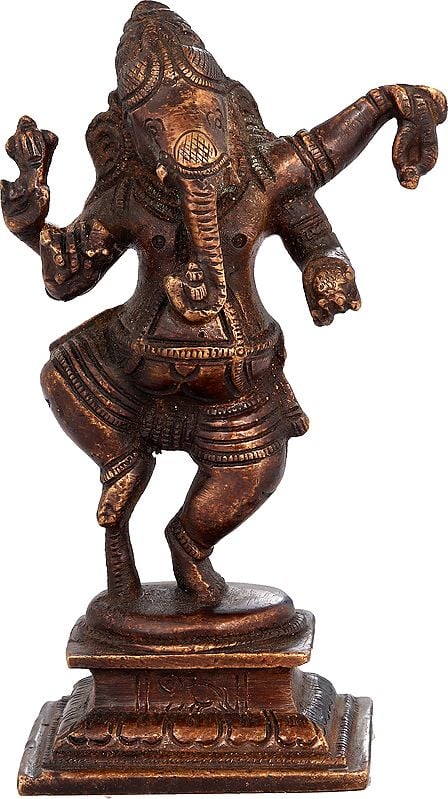 4" Dancing Ganesha (Small Sculpture) in Brass | Handmade | Made In India

Lord Ganesha is one of the few Hindu deities who has broken the boundaries of culture, sect, and region by uniting people in the ultimate spirit of devotion. Being the son of supreme lord Shiva and Devi Parvati, he belongs to one of the most worshipped families in Hinduism. In contrast to his mostly serious and very determined father, he stands for the cheerfulness and colours in one's life. Even though he is regarded as the deity of intellect, his intellect is not dry, rather full of sparkles and liveliness. That's the reason he can be found sometimes engrossed in contemplation, while sometimes immersed in his exuberant dance.

This beautifully crafted brass statue represents the cheerful spirit of lord Ganesha, portraying him lost in the rhythm of his existential dance. His dance is not fabricated or international, it is springing from his innermost being, pure and uncorrupted. It is the expression of his innermost divine. The artist has brilliantly captured the same spirit, the same vigour in this seemingly small yet enchanting statue. The elephant-headed god is dancing with his complete being, leaving nothing untouched. His four hands are spread in all directions signifying the intensity of his dance. The artist draws his inspiration from the ancient sculptures giving the statue a very antique and authentic look. Lord Ganesha appears to different devotees in his different forms. This form of the lord is for the ones who want to transcend their sufferings and step into the land of bliss and exuberance. This is what this statue stands for, the ultimate a human being can aspire for, which is beyond, yet within