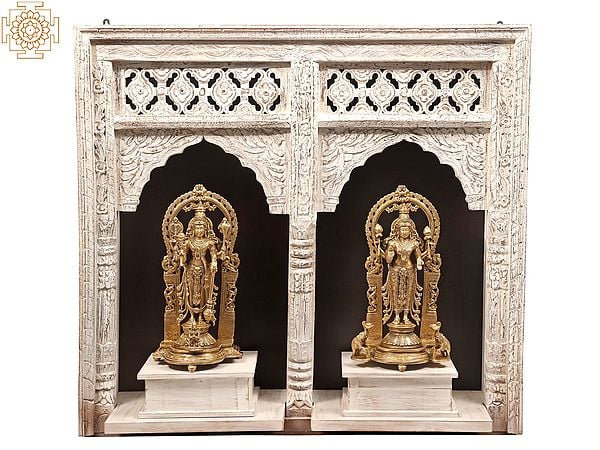 Lakshmi is the eternal consort of Lord Vishnu. According to the pauranik legends, she was born out of the ocean of milk at the time of the churning. As she emerged from the ocean she captivated all who watched her. The devas and asuras, alike, showered her with celestial gifts. Among the gifts was the Vaijayanti Mala, that Lakshmi chose to put around the neck of Lord Vishnu, accepting him as her spouse. He is of the supreme trinity, preserver of the world while she is the source of all material wealth.

In this beautiful wooden temple we have for you, God Vishnu and Goddess Lakshmi are depicted standing side-by-side. The temple has separate pedestals, with a central supporting pillar, for Vishnu and Lakshmi. The temple comes with wall-hanging screws and is structured like an actual temple, complete with beautiful carving upon its walls and the exquisite statues of the divine couple housed within. Vishnu is represented holding the divine conch, panchajanya and sudarshana chakra in his rear hands. His front hands hold the traditional lotus and the downward pointing mace. The goddess holds lotus buds in each of her rear hands while her right hand is raised in the blessing posture of Abhaya Mudra. Her front left hand is pointing downward in a gesture of generosity towards her devotees.

The ruling Lord and Devi over multiple lokas or realms of existence, Lord Vishnu and Devi Lakshmi are responsible for the preservation of life and drshyam (existence as we know it). While He is the presiding deity over the process of preservation, She in turn presides over wealth and resources which are indispensable to it. As such, they are the first couple of paraloka and, each time Lord Vishnu has been reincarnated in ihaloka (human realm of existence) so has Devi Lakshmi to take His side.

The twin deities are each in their own aureole. They have been sculpted with remarkable precision and finesse. For example, each detail of their attire and ample adornments has been brought out with perfection. A miniscule murti of Lord Garuda, His vahana, is to be found at the foot of Lord Vishnu’s pedestal. The plinth on which Devi Lakshmi stands, however, is flanked by a pair of gaja (elephants). While Garuda is the vahana (divine mount) of Vishnu, the majestic animals are integral to the traditional iconography of Lakshmi. Note the sheer proportion of detail introduced into the aureoles that frame the standing figurines - from the Yali brackets to the Kirtimukham at the zenith, the finish takes after the Hoysala style of centuries ago.

The deities are placed within a makeshift temple. It is carved from pale-coloured wood and comprises two discrete spaces for each of the figurines. A hint of latticework along the top and a rugged texture characteristic of wood.

Goddess Lakshmi blesses her devotees with wealth, fortune, and prosperity. She is a consort of Lord Vishnu and assists him in preserving and protecting the universe. It is believed that the goddess appeared at the time of the great Samundra Manthan, churning of the ocean. She chose to be on the side of Devas and became the eternal spouse of Lord Vishnu.

Exotic India presents an exquisite brass statue of Goddess Lakshmi and Lord Vishnu placed on the pedestal of an intricately carved wooden hanging temple. The splendor and grace of deities envelop the environs with serenity and positivity. Goddess Lakshmi is represented as enchantingly beautiful ‘Gaja Lakshmi’ means ‘giver of animal wealth’. She is depicted with four hands, lower hands are in Abhaya mudra and Varda Mudra while her upper hands hold lotuses. The hand in Abaya mudra indicates that Goddess is a blessing while other hand in Varda Mudra signifies that she is showering wealth, divinity, and bliss. Her upper torso is decked up with beautiful ornaments and her lower torso is covered with superfine garments which are held with the ornated belt. Her head is glorified with a tapering, multi-layered, conical-shaped crown. The halo around the crown enhances the brilliance of the deity. The intricately carved aureole of vines and animals around the deity complements the craft of the artesian. The two elephants seated near the pedestal are spraying her with water that symbolizes strength and water represents fertility or abundant prosperity. The presence of Kirtimukham on top completes the essence of deity.

Lord Vishnu’s brass sculpture is radiant and enchanting. He is depicted with four hands holding Shankha (conch), Chakra (Discus), Gada (mace), and Padma (Lotus). Shankha symbolizes the creativity aspect of Lord Vishnu. Chakra signifies the elusive nature of duality formed by illusion (Maya). The mace represents primal knowledge and the Padma characterizes purity. His body is well proportionate and decked up with beautiful ornaments. His conical crown with a halo around it reflects his supreme authority. He is standing on the inverted lotus which is further elevated with a pedestal at the base. His vehicle Garuda is depicted as a half-human and a half-bird seated on the pedestal. The aureole of vines around the Lord magnifies his grandeur and Kritimukham adds on the aspect of auspiciousness. The divine couple rests on the wooden hanging temple that is handcrafted with great precision.