The All-Encompassing Lord Vishnu, The Deity With Skin Like Dusk 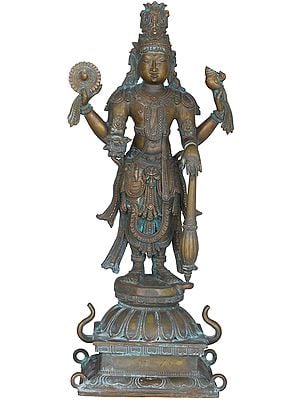 $795.00FREE Delivery
The Hindu dharm is a complex religion; and Lord Vishnu, its most complex deity. Like all Hindu deities, He is boundless in influence, non-specific in character, and all-embodying as a concept. The form you see here is His parlokiya roopa (heavenly form): tall and handsome, chaturbhujadhari (four-armed) with the signature discus in one them and the conch in another, and a complexion of blue overtones. He is the most serene and compassionate of the devas, which applies to each of the avataras (bodily manifestations) He distills Himself into in order to descend to ihloka (earthly realm). From Narasimha and Parshurama to Krishna and Rama, what is common to each of His avataras is the dusky blue skin and the role of saviour for us mortals.

This murti of the Lord has been cast in bronze. India's bronze sculptural tradition dates back to the Pallava rule in the third century, when it started to produce icons for the magnificent temples of the South. With the later patronage of the Chola dynasty rulers, the skill to work with bronze truly flourished. Today, South India is the home of bronze, this one having been handpicked from Swamimalai. From the tapering crown that towers above His head to the inverted lotus pedestal He is on, this fne sculpture bears all the signs of authentic Southern workmanship. Note the lifelike portraiture of the digits as well as the spiritually engaging composure of countenance.