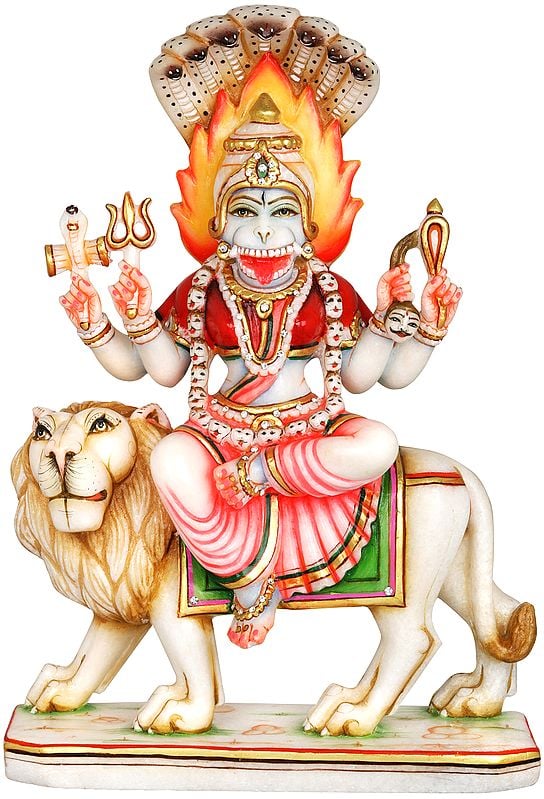 The names are many, the essence singular. The Atharvana Bhadrakali is also known as Devi Pratyangira, Devi Narasimhi, and Devi Simhamukha (lion-faced) Lakshmi. She is a manifestation of Shakti (the divine feminine/matter principle), incarnation of Devi Durga, and the feminine aspect of Lord Narasimha. A potent Devi, She finds mention in the various itihasas (Puranas and epics) and may be worshipped by only those proficient in Tantra.

A teevra (wrathful), all-powerful deity, She is the presiding deity over Atharvaveda. She wields in Her four arms - She is chaturbhujadharini, the one possessed of four arms - implements that are associated with each deity in the Hindu trinity. In addition to the same, in Her anterior left hand She holds the severed head of an adharmee by the hair. A necklace of more such severed heads cascades down Her torso. These serve to justify the epithet Kali in one of Her many names. The bloodthirsty composure of Her leonine countenance is enough to send a chill down the adharmee’s spine.

There is much to this sculpture that adds to the wrathful quality of Atharvana Bhadrakali’s iconography. A raging flame behind Her head in place of a halo. The powerful-pawed, big-jawed lion who is Her trusty steed. Finally, the hood of a multi-headed snake that rises above Her crown and forms an umbrella over Her.