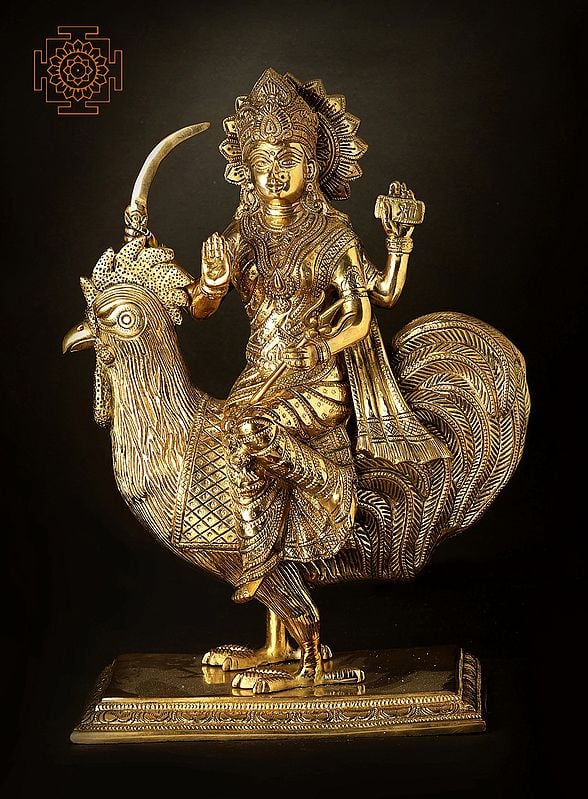 A divine incarnation of the Mother aspect of Shakti, goddess Bahuchara was born in the Charan (Gadhvi) society and is revered in Hinduism as the goddess of chastity and fertility; she is the patroness of hijra community and is always shown with a sword in her right posterior hand and a text of scriptures in her left posterior hand. Front left carries the trident and right is postured in abhaya mudra (showering blessings). As also shown in this sculpture, she is perched on a rooster (her sacred vahana), symbolizing innocence.

Goddess Bahuchara holds a symbolic story of her existence as Shakti’s incarnation; as per lord Shiva’s vardan to asura Dandhasur, that he will be confronted by his predecessor, Dhumrlochan’s killer in the form of a small girl, Mata Parvati took the form of this girl named, Bala Bahuchara and killed Dandhasur with her trishul in her ugra swaroop, thus saving the lives of all devas in devalok. The sculptor has kept true to this form by carving the artless innocence of devi’s facial expressions and is shown as clad in a beautiful fitted sari having bootis all over and parallel pleats jeweled stylishly. She sits in an elegant posture with the legs on one side and a cosmic stance of her beauty and perfection.

Zoom in to the précised carvings of the rooster on which she sits; neck and rest of the body chiseled in random striations and the tail like the long and slender leaf-like patterns layered , one on top of the other. The lavish ornaments on her body along with the highly carved crown and the flower aureole beautify her persona and nobility.