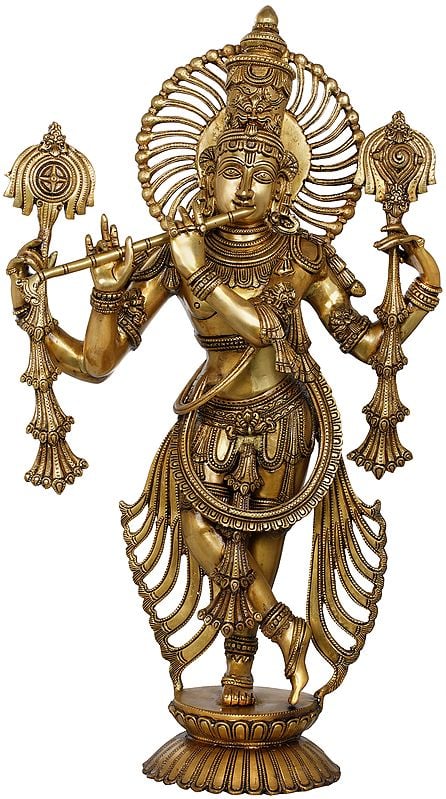 Postured in a tribend position, Shri Krishna stands on a lotus pedestal in his cosmic four handed form, the deity is playing the melodious sounds through the round holes of his divine flute placed in his lower right and lower left hand while holding the sacred conch (shankha) in the upper left hand along with the sudarshana disc in the upper right hand and also, these two implements look amazing and are differently presented. Therefore, this is Lord Krishna’s Aishwarya form (comic form) which symbolizes him as the supreme personality of Godhead. The Kirtimukha crown over his head is an outstanding illustration which holds an important place in the elaboration of this figure. The disc shape aureole with rays is an eye catching feature in this artwork whereas throughout the transcendental form, the richness, superiority and the detailing can be experienced by having a view on Krishna’s body all over adorned with exquisitely carved ornaments and superfine garments.

The speciality about this sculpture is that it is uniquely presented such as the cloth hangings on both the sides of the legs are symmetrically carved and the symbolic attires such as the divine cord (Janeyu) and the huge ornamental hanging at the front marks the transcendental identity of the lord who wears the lustrous jewels and pearls by heart lovingly.