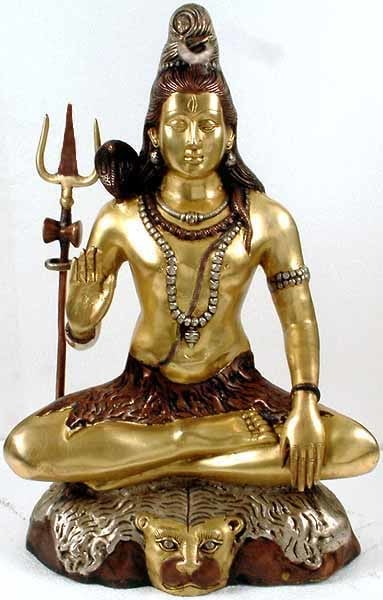 $913
FREE Delivery
Quantity
Usually ships in 10 days
Notify me when this item is available
The Atharva Veda mentions those manifestations of Shiva which rule the directions of space (see P. Banerjee, Early Indian Religions, p.30). The various aspects of Shiva in this regard are:

Here the sculptor has sought to delineate Shiva in his benevolent aspect of 'Bhava,' or the 'Source of all things.' Befittingly his body is hued a splendid golden, the color of the sun, the awesome creator with whom Shiva is identified in this manifestation.

Shiva is seated on a tiger skin, and the head of the dead animal can be seen hanging over the symbolic mound which signifies the Mount Kailash, whose summit serves as his abode. The ornaments adorning him (armlets, bracelets and necklaces) are made up of the sacred rudraksh beads. In addition, he wears a silver amuletic choker and also a serpent coils himself around his neck, rasing its venomous hood at Shiva's right shoulder.