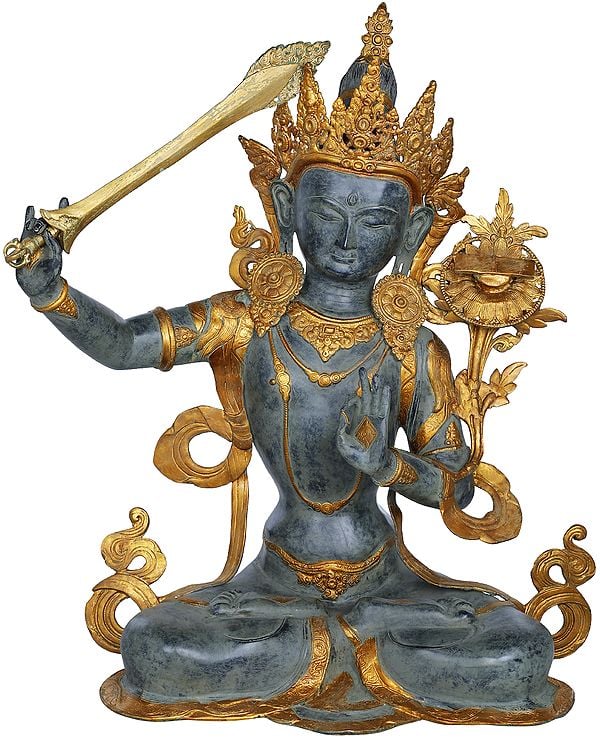 FREE Delivery
Only 1 available
$1595
Bodhisattva Manjushri of the Mahayana pantheon is instantly recognisable from the sword in His right hand. High above His head He wields it, its long slender body ending in a narrow motif of miniscule flames. It cuts through avidya or ignorance; indeed, Manjushrikumarabhuta - as is His full name, translating to ‘the ever-youthful Manjushri’ - is the presiding deity over prajna. Prajna, of which ‘insight’ would be a rudimentary translation, is an integral Buddhistic value.

The iconography of Lord Manjushri is in keeping with the traditional references to Him in the Mahayanasootras. The lissome form of the ascetic yogi, draped in a vivid gold-hemmed robe. His legs are gathered in the perfect padmasana: the knee-and-hip trifecta in contact with the ground on which He sits, heels gathered directly below the navel, and the soles facing skyward. A number of sashes descending from His shoulders and rising from the hems of His dhoti, flank His shapely torso. Against the washed-out coppery hue of the Bodhisattva’s body, the gold of His attire and adornments make for a brilliant contrast.

From the crease of His left elbow rises a sprig of the myrobalan, the mystical Himalayan plant, root of traditional Tibetan healing. It is an integral aspect of the iconography of Buddhas and Bodhisattvas alike, lending to the healing power of Buddhist visualisation. It is done up in the same gold of the Bodhisattva’s karnakundalas and five-spired crown.