Brahma, One of the Trimurti – The Three-Aspected Supreme (Large Size) 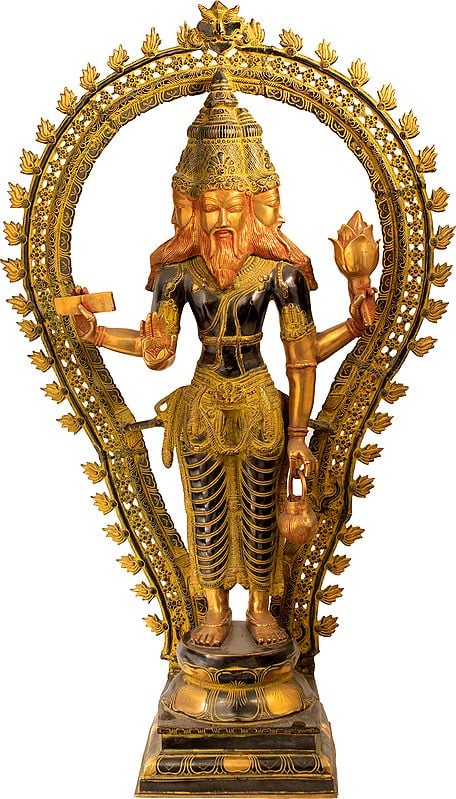 $1595.00
This item can be backordered
Time required to recreate this artwork
4 to 5 weeks
Advance to be paid now
$319.00 (20%)
Balance to be paid once product is ready
$1276.00
Notify me when this item is available
Save to Wishlist Send as E-card Share by Email

Rare in its visual effects, the deep blue of his ensemble – the half sleeved tight-fitted tunic joining his ‘antariya’ on the waist, affording amazing contrast to his gold-like lustrous body colour, the brass-cast represents Brahma, one of the great Trinity, the other two being Shiva and Vishnu. In Indian theology the four-faced and four-armed Brahma is hailed for creating the world while Vishnu sustaining it and maintaining order, and Shiva terminating it after it has completed its tenure. Creation, sustenance and dissolution are inherent aspects of all things, singly and collectively, hence the Trinity is believed to be operating every moment. As existence is one but is three-aspected, the three-aspected Trinity is also one and often operates for the totality of the goal. Vishnu is revered as maintaining order but Brahma, the Creator, is supposed to generate life and also all sources of knowledge, something of the domain of Vishnu. This effectively reflects almost in all divine images of Hindu pantheon.

As the mythical tradition has it, originally Brahma had five heads but censored for a lie the wrathful Shiva had severed one of them and since onwards he has four heads. Once in a fit of arrogance Vishnu and Brahma quarreled each claiming his priority over the other. The issue was taken to Shiva to decide. Shiva ruled that one who first reached the end of Shiva-ling would have priority over the other. One moved skyward along the Shiva-ling, and other, into the nether region towards its other end; however none found its end. After some time Brahma came back claiming that he had found its end, and as its proof brought a Ketaki flower and placed at Shiva’s feet. Vishnu returned empty handed. Shiva knew that Brahma was lying and in counter test it proved. Annoyed by his lie the wrathful Shiva severed one of his heads and banned Ketaki flower in his worship, a tradition still followed.

Since then Brahma’s idols were conceived with four heads as also with four arms carrying in them the ‘Pustaka’ – book, supposed to symbolize the Vedas, lotus, ‘kamandala’ – the water-pot with spout, and ‘japamala’ – rosary, which in this image his hand held in ‘abhay’ – freedom from fear, has alternated. This iconography of Brahma suggests that he was not supposed to create merely the mass with life but also a knowing mankind besides Order and righteousness as its part, as also fertility and vegetation. This effectively reflects in his images and also in this one. While the lotus that the image carries symbolizes life, the ‘Pustaka’, the knowledge that he created along the life, the ‘kamandala’, the courier of water, that he carries  in one of his hands, the vegetation and fertility, and ‘japamala’, a believing and thoughtful mind. In this image, the ‘japamala’ has been alternated with the gesture granting ‘abhay’ assuring all that evil shall not come in their way of righteousness and is thus an attribute identical to ‘japamala’.

Cast in gold-like glistening fine brass the statue of the cosmic father has been installed on a tall pedestal. It consists of a square base with a plain moulding on the bottom and a tapering one with stylized lotus patterns above it. Above this base moulding there is a fully blooming lotus, a circular moulding and a thin delicate plain black moulding on the top. He has been represented as standing in the middle of a highly decorative and strangely conceived ‘prabhavali’ – fire-arch, with outer edge bursting with flames-like motifs usually comprising the part of fire-arches in Nataraja iconography. Here it symbolises burst of Brahma’s creative energy. Atop the fire-arch there is the auspicious Shrimukha motif symbolising auspicious beginning. The Shrimukha features are repeated also in the figure’s waist ornaments, a broad girdle and a highly decorative central ‘patta’, the decorative textile worn in the parting of the legs. Visible in the image are three faces, the fourth being on the back side. The beard has been conceived with each hair distinctly cast. The image has been richly adorned with various ornaments.