Buddha In Bhumisparsha Mudra, Seated On The Mystical Throne Of Enlightenment 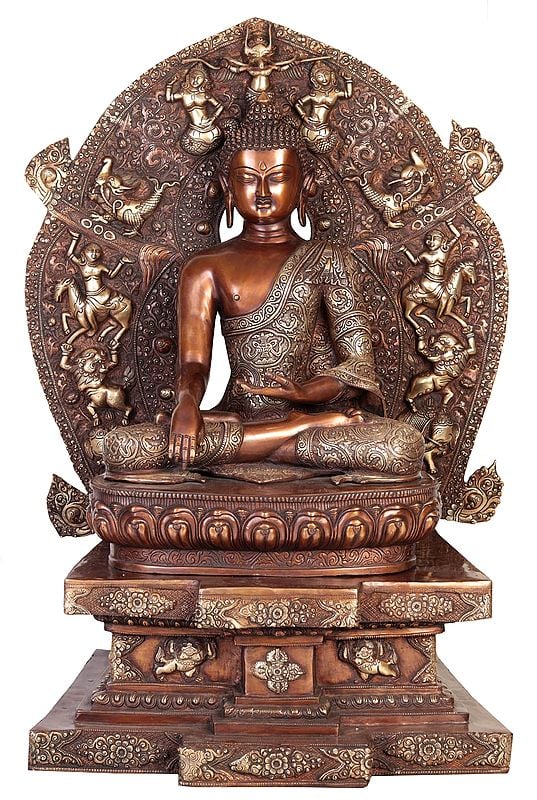 The Buddha stands for all that is wise and compassionate. Having spent his youth trapped in life's luxuries (he was born to the Shakya clan ruler as prince of Kapilavastu, and given a fitting upbringing by His father), He took to harsh asceticism in a bid to seek answers to the questions that such a life inspired in Him nevertheless. His wanderings through the evregreen forests and plains of North India constitute almost another lifetime in His personal history, that culminated with His sitting down to meditate at the foot of the fateful tree at Bodh Gaya. When elightenment finally dawned on Him, He touched (sparsha) a hand to the earth (bhumi) to call upon it as witness to the transition of His soul. This magnificent sculpture of the former Shakyamuni captures Him in that all-important bhumisparsha mudra, His limbs gathered in the gracious poorna-padmasana, a palm opened outward on His lap.

This murti has been handpicked for the brilliant handiwork of the artisan who has poured into it the entirety of his devotion to Buddha. His lissome proportions are fit for a divine being; so is the intricately engraved robe that descends down His shoulders. His beauteous countenance, framed with kundalas dangling from His long earlobes, is such as to inspire a meditative trance in the onlooker. The throne He is seated on is the mystical picture of His enlightenment. From the elaborate aureole, the silhouette of which resembles wave layered upon wave, carved with a number of celestial beings; to the multi-tiered pedestal. Note the ethereal vines and creatures that have been sculpted onto each layer of the pedestal, the topmost one of which comprises of a row of lifelike lotus petals.