The Bust Image of Devi: A Wood Carving 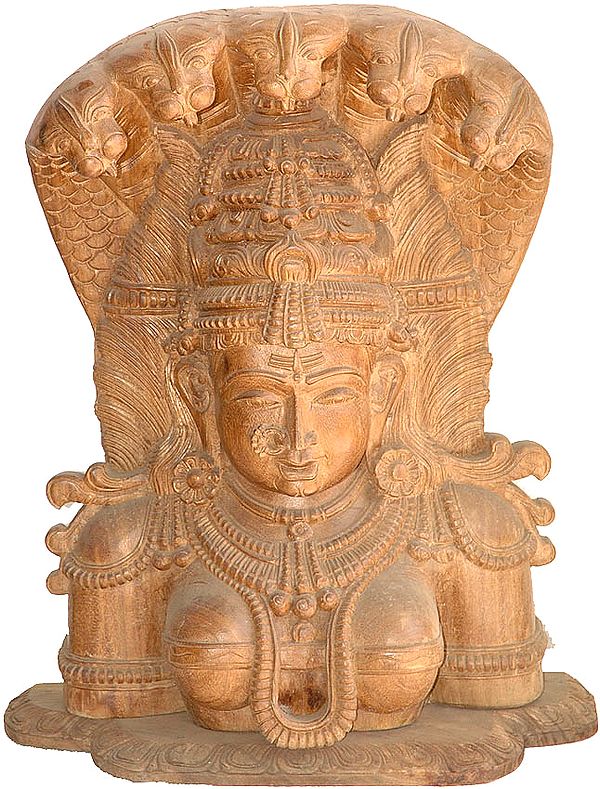 $1008.00
This item can be backordered
Time required to recreate this artwork
20 to 24 weeks
Advance to be paid now
$201.60 (20%)
Balance to be paid once product is ready
$806.40
Notify me when this item is available
Save to Wishlist Send as E-card Share by Email
This bust of a female divinity, a brilliant piece of art rendered with minute and elaborate details, represents Devi, the primordial female divinity that preceded all gods, all forms and non-forms and the time, with the great serpent Shesha canopy-like holding its five-hooded apex over her. Easy to display in an alcove, on a half wall or column, or on a raised platform like space, as afforded a temple architecture and hence often classified as a temple wood carving, the artist has preferred a bust statue with a detachable base for representing the goddess. Chiseled out of a block of Bangai wood, the world class timber from Karakochari region in Tamilnadu, used for carving sculptures now for centuries and has given to the world of art some of its very rare pieces, affords to the image of the goddess its natural colour with natural variations allowing light to aptly reflect as also deflect creating the magic of light and shade, as if suggesting that that both are her aspects. The image outstands in its smooth and even surface and a soft gentle look the eye can rest on for any length of time without being tired out.

Every part of the image has been meticulously chiseled and sensitively treated discovering distinctly skin’s every fold and a hair’s every dimension pursuing the tradition of great South Indian wood-carving and bronzes matured over centuries, and it is this adherence to a great tradition that imparts even to this contemporary work a timeless quality and high aesthetic levels of classical models rarely seen in art-works now. The presence of the great serpent Shesha revealing the divine status of the represented figure apart, her divinity more powerfully reveals in the rare composure and quality of agelessness with which the artist has vested her figure. The image has been endowed with timeless youth but not as young, youthfulness being the quality of her being, not denotative of her age : adolescence, young, advanced or old. Her vigorous youth has been conceived as timeless – transcending the scale of time. Though not for sanctum, or to ritually consecrate, or subjected to worship-rituals, the image’s divine identity is self proclaimed, and it is this spiritual fervour combined with its aesthetic quality that imparts to the image its rareness.

Providing his image with wider sectarian perspective the artist preferred carving it with broader attributes of two major sects of Hinduism : Vaishnava and Shaiva, or rather beyond both. With the great serpent Shesha, a Vaishnava ‘tilaka’ mark defining its every hood and the humanized look of each of them, not only suggesting the Great Serpent’s Vaishnava identity and links but also symbolising Vishnu’s presence, as attending upon the goddess or guarding her, and the towering Vaishnava crown, the represented divinity appears to be Lakshmi, the consort of Lord Vishnu. However, the ‘tri-punda’ mark on her forehead, strictly a Shaivite attribute, suggests her Shaiva identity. In other things, especially in well swelled breasts full of milk, could be the attribute of any, in Lakshmi’s case defining abundance, and in Parvati’s, beauty and motherhood. Obviously rendered free-lance, not commissioned by any particular individual or a temple pursuing a particular sectarian line, the artist might have preferred the image’s wider acceptability and carved the divine form just as ‘Devi’, without attributing to the image any particular sect’s identity.